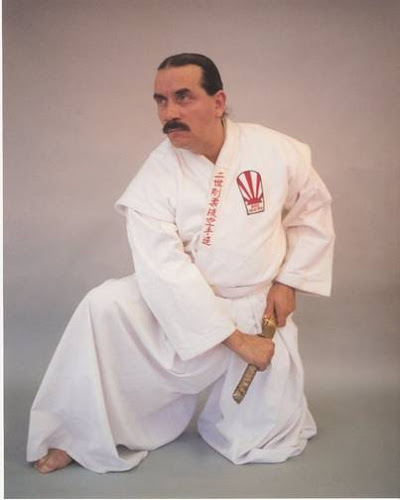 An EVG reader shared the following in memoriam ...
Longtime Lower East Side resident and martial arts legend Wilfredo Roldan, or Hanshi, passed away on Christmas Day. He was 69.
Some readers may have seen a small shrine pop up outside the former University of the Streets building at 130 E. Seventh St. near Avenue A, where he taught and ran the Nisei Goju-Ryu system for many years. 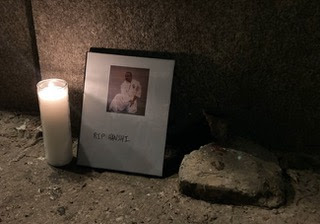 Roldan was born in Puerto Rico and moved to New York at a young age. His martial arts career began in the mid-1960s, when he trained under local greats including Sensei Owen Watson and Grand Master Frank Ruiz. Martial arts were a valuable asset in the streets of the Lower East Side.

As Roldan progressed Nisei Goju-Ryu, mentoring countless students along the way, he was a regular at Odessa and other neighborhood hotspots. Watch him tell the story of the dojo and more local lore here and you can notice a characteristic twinkle in his eyes.

Having starred in a number of martial arts movies in the 1970s ("Black Force," "Velvet Smooth" and "Dragon Express"), he also taught physical education in NYC Public Schools for over two decades. With the "University of the Streets, the Prequel" (shot at Seventh Street and Avenue A), he continued to add to his list of endeavors and accomplishments.

He will be missed, but his spirit carries on. Osu.
Posted by Grieve at 11:00 AM

So sorry to hear that, very sad news.
I didn't know him, but he sure looks familiar.

A unique and generous soul - May he rest in great peace -

Thank you for the tribute. He was one of a kind and a wonderful individual with a great history in the neighborhood.

He is missed. A very nice person.

Ah I really liked him he was a really funny positive person. Had not seen him in ages...

May he rest in peace. Knew him for many years. He was a mentor to my son.

Enjoyed training with Wilfredo many years ago. Was at his Black Belt test at Nisei headquarters. Enjoyed him as a person and a martial artist. . Rest In Peace

Very sad to hear this. He was a positive force and my son was studied with him and we also lived one floor above his Dojo for years. Rest in peace dear friend. jjk

We were best of friends!
He and i made black belt together back in the 70s.
I miss him.
Sensei Ron Brie