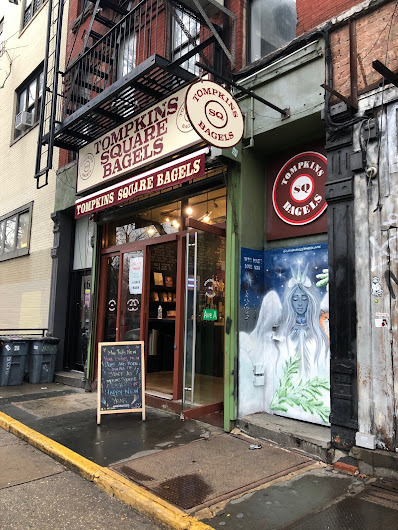 On New Year's Eve day, ConEd arrived to restore the gas service at Tompkins Square Bagels on Avenue A between 10th Street and 11th Street... ending a nearly two-month odyssey.
A quick recap: On Nov. 11, a carbon monoxide sensor went off related to the storefront's hot water heater. Workers discovered a hole in the flue that brings in replacement air. Because of the hole, replacement air wasn't getting into the basement, thus the high carbon monoxide reading, owner Christopher Pugliese said. Regardless of the find and fix, ConEd still turned off the gas to the storefront.
To keep the popular shop running, Pugliese, who helped feed the homeless and essential front-line workers during the pandemic's worst days in the spring, spent $7,000 to buy three electric grills and have three 220-volt power lines installed so his team could cook.
While Pugliese was annoyed that he had to close the shop from 10 a.m. to noon on one his busiest days of the year ("Yes, I'm complaining") when ConEd showed up, he's extremely happy to be back up at full cooking power.
He's also thankful to the encouraging comments and insights that EVG readers left on the previous posts about the situation (links below).
"I'm really grateful to all the people who wrote letters and gave advice through those comments," Pugliese said.
He also said he received helpful assistance in navigating the bureaucracy from local City Councilmember Carlina Rivera and her staff member Pedro Carrillo. "They pushed hard for me and Pedro really seemed to genuinely care," Pugliese said. "He called me three times a week and gave lots of help."
"This whole ordeal stunk and it cost me more money than I want to think about but it could've been so much worse," Pugliese said. "Thank you and happy New Year."
Previously on EV Grieve:
• Tompkins Square Bagels on Avenue A continues on without gas — or help from the city
• With gas shut off, Tompkins Square Bagels owner wonders why the city isn't helping small businesses during pandemic
Posted by Grieve at 5:20 AM

That is GREAT NEWS! Happy New Year, Chris, and I hope it will be a really good year for you & TSB! We're so lucky to have you in our neighborhood.

Hooray! A great way to start the week. Thanks to everyone who helped and to TSB for being a valued community member.

They are so lucky. Con Ed responds faster to businesses. Our gas is still off. It's been five months. I hear residents in a building on 11th Street are going on 13 months without gas.

We have gas for one reason and one reason only. I went to the press, made a big enough stink to get the City's attention, and gave Con Ed and DOB a public black eye. Otherwise we'd still be waiting. Want to stress that if not for my 2nd Ave location TSB would be gone. Absolutely would be history right now. !0 years would've been washed down the drain and I'd be broke. Grieve saved TSB.