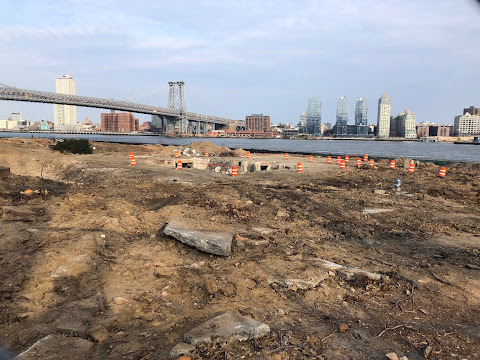 Here's a look at East River Park from the Corlears Hook ferry access ... these photos are from Saturday and show where the amphitheater used to be... 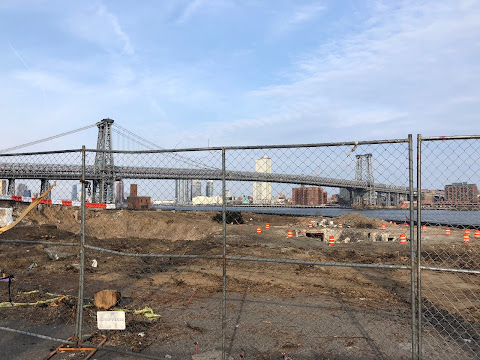 Despite the barren terrain, we spotted some bulbs coming to the surface... 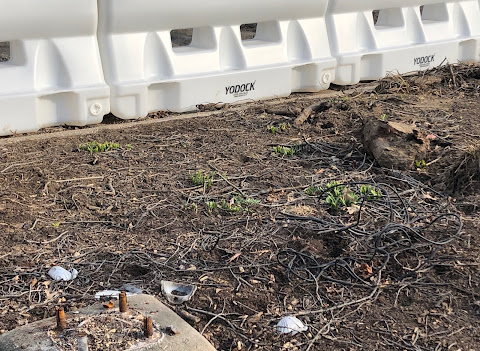 Meanwhile, there's a press conference tomorrow (March 9) at 9 a.m. at Corlears Hook Park to "call on NYC Parks to halt tree work permits."
Starting next week, activists say the city is slated to cut down another 50 healthy mature trees from the immediate area. Speakers are expected to include District 1 City Councilmember Christopher Marte, per media invites.
And as previously reported ... Since early December, work has focused on cutting down hundreds of mature trees and taking out amenities such as the tennis courts in Project Area 1 below Stanton Street.
The current plans call for gutting East River Park — burying the existing 57.5-acre land under fill and elevating it by 8-to-10 feet above sea level. The new park is expected to protect the Lower East Side from storm surges until at least 2050.
Park entry remains at Houston, Sixth Street and 10th Street. The city has said they will maintain public access to a minimum of 42 percent of the park throughout construction, expected to be complete by the end of 2026.
Posted by Grieve at 5:01 AM

Erik Bottcher(district 3) and Christopher Marte (district 1) seem to be far more in touch with the concerns of district 2 residents than Ms. Rivera ever was. And they are both new. Mr Bottcher is very concerned about the current state of disaster of open restaurants and Mr. Matte apparently about East River Park.

The city has said they will maintain public access to a minimum of 100 percent of the FDR Drive throughout construction, expected to be complete by the end of 2026.

Has our new mayor said ANYTHING about this? He made a big deal of making the rounds around the EV for photo ops yesterday, but apparently didn't make it to ERP.

Our new mayor is a hybrid of DeBlassio. Adams seems more interested in photo ops and interviews than tackling soaring violence and crime in our city rather than "his city." So far, I am unimpressed with his arrogance and ego. He also has made no mention to this epic disaster of what was once East River Park. It makes me ill looking at those photos. That barren land with the absence of trees. This is laying the groundwork for future real estate projects. Mark my words. It will happen one day soon when this is all complete. Just my two cents.

Evidence that NYC will rip up everything that actually fights climate change emissions in order to supposedly protect against its effects (and make sure not one car or truck is inconvenienced in the meantime). All defense, no offense. Not a very long-term strategy.

And, oh yeah, in return for losing access to the park--during Covid--the EV and LES got...... ? (Where are the new bike lanes? Alternate green spaces? Real-time publicly accessible air monitoring? Anything?)

NYC, such a leader in urban ecology and community relations.

Nice to see our neighboring districts getting a new generation of climate-committed leaders instead of the real estate-friendly one we have in our district. I think the residents of District 2 will be outraged once Spring starts, and they realize that our Park has been needlessly destroyed.

I was so excited for Carlina the first time around. Now she's obsessed with nonsense shit like "open streets" and destroying the one area of decades old natural growth we had.

@9:50 While I'm disgusted with the way the park was handled, your statement about real estate makes no sense. It's public land and slated to be a park and that's all it can be. That's not land for real estate.

@7:00- The courts have set a new precedent for what constitutes the use of a "park". In the case of ERP, the use is also now defined as "flood protection". It is not a great leap to see how an over-budget project (over twice as much as the original park-sparing plan), especially in an economic downturn, could become a "public/private partnership" project which will open it up further. This stealing of public land is happening all around us, such as the taking of public space by restaurants and bars. It is also happening on Governors Island where a "Climate Resiliency Hub" is laying the groundwork for private development of public land. The reason will always be cloaked in some noble-sounding premise, but the theft of extremely valuable public land will be the outcome- never let a crisis go to waste.

Look no further than the Christmas market, ice rink and fashion shows at Bryant Park, Shake Shack in Madison Square Park, Tavern on the Green in Central Park, and the Holiday Market in Union Square to see our PUBLIC park land used for private profit.

It's so awful what they did to our park. Just devastating. Now that spring and summer is upon us, one less place to go in escaping the stifling heat/humidity. I feel bad too for the wildlife. Just sad all around.

Let’s just be clear on one thing: this NEVER would have happened, a thousand mature trees destroyed, in a place like Riverside Park. This is a disgrace and we will never forgive our local leaders for facilitating it.

Has our new mayor said ANYTHING about this? He made a big deal of making the rounds around the EV for photo ops yesterday, but apparently didn't make it to ERP.

New mayor knows nothing, says nothing.

Anonymous at 7:21 AM is absolutely correct that this would never have happened in Riverside Park. This is tragic, toxic, and unforgivable.