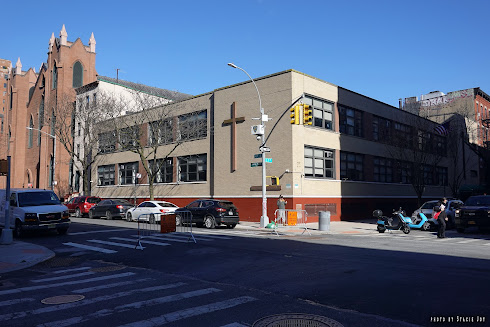 A handful of NYC public school teachers who received medical or religious exemptions to the city's COVID-19 vaccine mandate are now working remotely from the former St Brigid School on Avenue B and Seventh Street.
Yesterday was the first day of teaching remote classes from here. EVG contributor Stacie Joy confirmed the use of the space during a brief visit to the school, where masking is mandatory.
A source on site said the Department of Education (DOE) would be using the building until the school year ends in June. It was not immediately known how many teachers were working at the St. Brigid site. Stacie spotted at least 20 employees, including custodial and security. (By the end of last September, the DOE had granted medical and religious exemptions to 530 staff members, the Daily News reported. The teachers had previously been working from home, sources said.)
One teacher, spotted leaving the building, declined to comment on how the first day went.
As previously reported, city workers — including teachers, supervisors, and school staff members — were told they will be fired if they do not either get the vaccine by Feb. 14 or agree to remain on leave without pay and drop their objection to the policy. (Last month, the Supreme Court denied a request from a group of NYC teachers seeking to block a vaccine mandate for employees who were not given a religious exemption, per NBC News on Feb. 11.)
According to CBS News on Feb. 15: "The 1,430 workers who lost their jobs represent less than 1% of the 370,000-person city workforce and the number of terminations was far fewer than expected before the ... deadline to get the shots."
Late last year, interior renovations began at the school on the NE corner of Seventh and B, prompting speculation about what might be next for the building.
In February 2019, the Archdiocese of New York announced that St. Brigid School would cease operations at the end of that academic year, a move that blindsided students, parents and faculty alike. Founded in 1856, the Saint Brigid School was one of seven Catholic schools marked for closure by the Archdiocese in 2019.
Given its A-plus EV location with Tompkins Square Park views, some residents have figured this property would end up a high-end residential complex much like the former Mary Help of Christians on Avenue A and 12th Street.
Posted by Grieve at 5:30 AM

So wait, St. Brigids is a Catholic school and the head of the Catholic Church himself has said there's no medical exemption for the vaccine but these teachers are getting them anyway?

This is NOT a Catholic school anymore. St. Brigid closed in 2019. NYC's public school system is leasing the space for the next few months.

Who are they teaching? I though there was no remote option for nyc public school students this year?