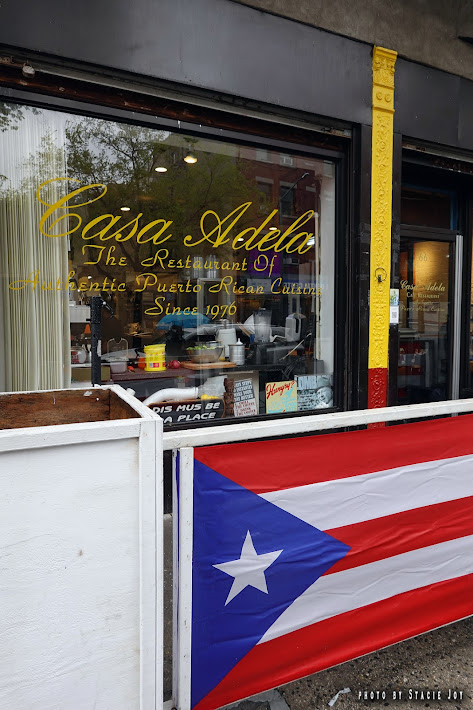 Photos by Stacie Joy
Updated 8:15 p.m.
District Leader Assembly District 74 Part A Aura Olavarria, who drafted the petition, reports that the CB3 committee approved the street co-naming this evening.
--
A campaign is underway to co-name Avenue C between Fourth Street and Fifth Street after Adela Fargas, the founder and namesake of the popular Puerto Rican restaurant Casa Adela on the block.
Fargas, who ran Casa Adela here for decades, died in January 2018. She was 81.
Adela's son Luis Rivera, who has been running Casa Adela with his sister Abigail, is collecting signatures of support at the restaurant, 66 Avenue C... 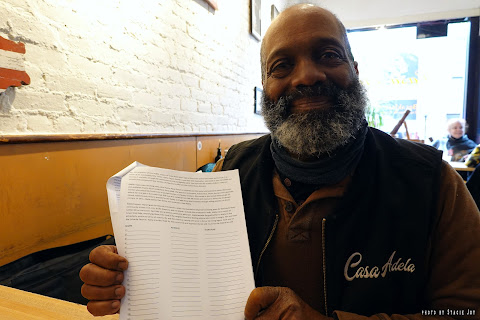 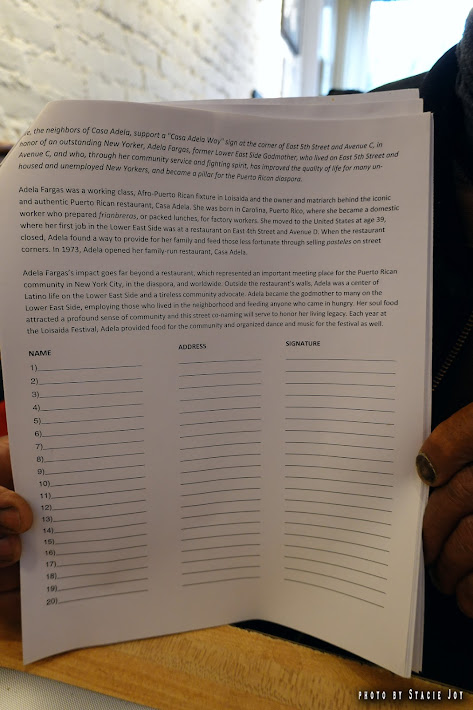 Adela Fargas was a working-class, Afro-Puerto Rican fixture in Loisaida and the owner and matriarch behind the iconic and authentic Puerto Rican restaurant, Casa Adela. She was born in Carolina, Puerto Rico, where she became a domestic worker who prepared frianbreras, or packed lunches, for factory workers.
She moved to the United States at age 39, where her first job in the Lower East Side was at a restaurant on East 4th Street and Avenue D. When the restaurant closed, Adela found a way to provide for her family and feed those less fortunate through selling pasteles on street corners. In 1973, Adela opened her family-run restaurant, Casa Adela.
Adela Fargas's impact goes far beyond a restaurant, which represented an important meeting place for the Puerto Rican community in New York City, in the diaspora, and worldwide. Outside the restaurant's walls, Adela was a center of Latino life on the Lower East Side and a tireless community advocate. Adela became the godmother to many on the Lower East Side, employing those who lived in the neighborhood and feeding anyone who came in hungry.
Her soul food attracted a profound sense of community and this street co-naming will serve to honor her living legacy. Each year at the Loisaida Festival, Adela provided food for the community and organized dance and music for the festival as well.

Tonight at 6:30, members of Community Board 3's Transportation, Public Safety, Sanitation & Environment Committee will hear the item. (You can join in via Zoom.)
As reported in early December, the building's landlord — a Housing Development Fund Corporation (HDFC) — at 66 Avenue C is looking to increase the rent on the LES institution to a rate that Luis Rivera says is not feasible. The two sides were working on an agreement, and we have not heard any updates.
Posted by Grieve at 5:30 AM

She certainly is deserving and was a wonderful woman but I'm just not a fan of street namings. Maybe a small garden with a plaque on a tree in front. When I walk in the West Village I always pass a building that has a sign on it for Emma Lazarus with a brief blub. I'd rather see more of those type dedications. It would also allow for more people to be recognized.

Well deserved honor for Adela a loving and honest mother who work very hard getting up at 4 am and going to sleep very late. Her cooking made us feel at home. Well done Adela. We love you then and forever.

I wish she was pressent to see what she accomplish 🙏