Inside the rent dispute at Casa Adela 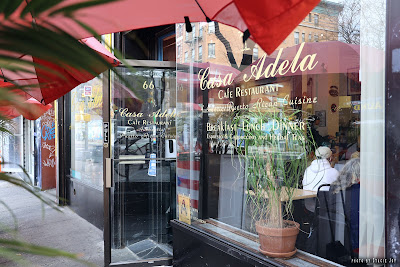 Photo by Stacie Joy
Eric Lach, a staff writer at The New Yorker, takes a deep dive into the rent dispute that has unfolded at Casa Adela at 66 Avenue C.
As previously reported, the building’s landlord — a Housing Development Fund Corporation (HDFC) — is looking to increase the rent on the 45-year-old LES institution. The rent hike, from $1,350 to, eventually, $6,750, is a number that the current owner Luis Rivera, son of the late founder Adela Fargas, has said is not feasible.
The piece quotes local activist Power Malu.

“Adela was like my mom,” he said. “This restaurant is like people’s second home.” But, Malu cautioned, the dispute between the restaurant and its landlord wasn’t the old story of a big, bad developer kicking out a neighborhood joint. “You can’t just say, ‘Oh, this is gentrification,’ ” he said. “It’s not.”

The building, as much as the restaurant, was part of the Puerto Rican community’s legacy in the neighborhood. Malu gestured toward a blue-and-white tile mural above the building’s front door, which read “66 Ave C Homesteaders.” “These people, actually, with their own hands, helped to restore this building,” he said. “And that’s important for people to know.”

The New Yorker is the first media outlet to speak with the HDFC’s three board members.

Gladys Duran, the board president, was born and raised in Loisaida, while Eva Eumana was born in Mexico, and Maria Peralta in Nicaragua. All three had been in the building since the nineteen-nineties, when sweat equity was still expected of new residents. Eumana, who works as a housekeeper, did cleaning work at other HDFC buildings to contribute her share.

And some background on the building’s finances.

In 2018, the board members said, the prior board president met a real-estate broker named Aretha Busby at a seminar for small landlords held at City Hall. The building hired Busby to write a report about its two commercial spaces — the space not occupied by Casa Adela is currently a bodega — to get a sense of how much more money it could be charging.

The building then hired [real-estate lawyer Gregory] Byrnes, who took a look at its management and finances and was appalled by what he found. Byrnes was told that the building needed hundreds of thousands of dollars for capital repairs to address issues with the roof and the boilers, and, Byrnes said, to pay for a management company and a superintendent. The co-op was operating at a deficit each year, and its reserve fund was depleting. Byrnes had helped the residents reduce the size of the board, from every resident in the building to the current three members, to aid in decision-making, and was preparing to help them sell a couple of vacant apartments, which will be listed at only a “fraction” of the market rate, he said, in keeping with the building’s history. Raising the rent on the storefronts was needed to make up for the money the building wasn’t getting elsewhere. It had to come from somewhere.

According to the article, the two sides are scheduled to appear in court this month. You can read the whole piece via this link.
Posted by Grieve at 11:30 AM

Hopefully they will find some middle ground in which Casa Adela can continue to provide always satisfying food.

The building needs money. The rent was too low for too long. They need a tenamtvthat can pay the necessary tent. That's reality. The money has to come from somewhere. The commercial spaces are supposed to support the building. This building needs better management.

A terrible situation for all, but the little
restaurant should not be expected to make up for what
was not done.
A $5,400 per month increase is not possible for a small place.
If they close, where will that leave them ?
Homeless, unemployed ?

They had cheap rent for a long time. They can find another space or pay more rent. The management should have gradually raised the rent and this wouldn't have happened. The business are supposed to subsidize the building not the other way around. That's the only reason these buildings have commercial spaces- to keep the building financially viable and to keep their emergency reserves at the necessary level.

The rents are unrealistic for small businesses, that's why most close.
Of course they can find another spot, but affording it and staying in business
is another story.

Are they really going to find someone else to give them $6750/mo. for that location? It sounds like they're trying to plug a hole with everything they've got. But what they've got may not be enough.

Yes Anonymous @ 809 you are absolutely right the rent in this City is too high for businesses which is why there are so many vacant storefronts as a result of all the small business going out of business. This is especially true of establishments that sell food like restaurants who can only charge so much for the food and drink that they sell. If they raise their prices to meet the higher rent and end up charging too high, then their customers will stop coming and eventually they will close down as a result. It is a no-win situation.

This is why internet mobs etx. with no nuance are the worst. There are two sides and nuance in situations. We can still want to keep Adela and hope for balance without being psychotic.