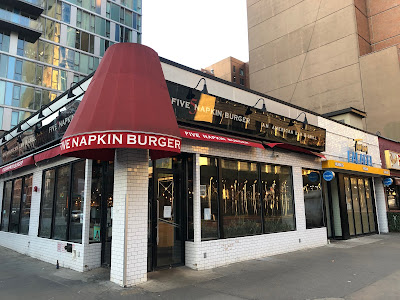 After nearly 10 years on the SW corner of 14th Street and Third Avenue, 5 Napkin Burger has closed... signage on the front door points would-be patrons to other locations of the chainlet... 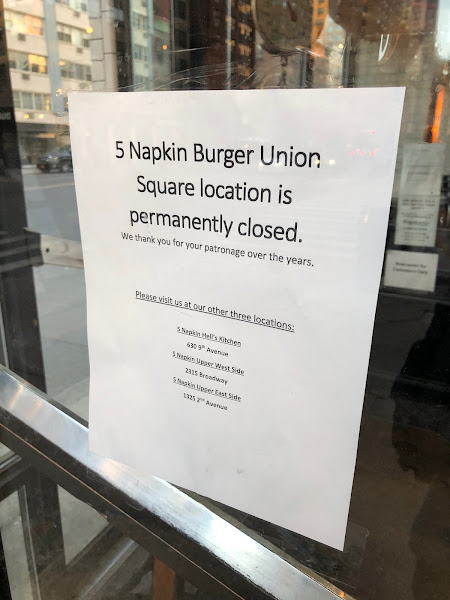 The burger joint opened here in February 2012... and in the summer of 2019, downsized the space, which became 5 Napkin Burger Express for two years ... which became Tamam Falafel, which closed at the end of 2021. (Both 5 Napkin and Tamam Falafel share the same ownership.)
This space was previously home to Robin Raj Discount Health & Beauty Aids (that seems like a long time ago!).
There will be some speculation about the future of this high-profile corner with single-story structures — seemingly ripe for development. Not sure what kind of air rights there might be with the newer 21-floor 110 Third Ave. on one side and NYU's 17-floor Palladium Hall on the other.
Thanks to all the EVG readers who shared this news!
Updated: Flashback to the 1980s and Disco Donut here
Posted by Grieve at 5:00 AM

Damn I’ve never had one of their burgers but always looked busy when I walked by it. Surprising.

Between the condo building on Third and the NYU dorm (former Palladian)I would think any ability to develop has been so!d off as air rights

and the former location of the donut shop...was it really called "disco donut", or is that just the nickname we had? this was back in the 80s.

I recall that being the name.

Maybe Carlina Rivera is proposing another out of scale, zoning defying "tech hub"here?

@8:13 yes it was actually called disco donut, there is a picture that is online that shows this particular corner and you can clearly see the name. The corner where the subway entrance is was a pizza shop.

There are still air rights on this corner. Just a matter of time


The air rights for this parcel were transferred to NYU, and were used in connection with the construction of Palladium Hall. The building on the SW corner used to be three stories, but the upper two stories were removed so that more air rights could be transferred to NYU. The corner parcel cannot be developed further.

Outlier—2-story building became one story. Carmelita's (event space for the LES Puerto Rican community and more per Jeremiah) upstairs, and I'm pretty sure there was a Puerto Rican bakery downstairs at one point. This is going back to the 1960s at least.

I can't help but feel that part of the entire 14th Street corridor's failure to thrive is due to the restriction of passenger vehicles from 3rd Ave to 8th Ave.

While I understand the rationale for the original closure, I do think that the combination of Covid and the street closure have greatly hindered the recovery here and this closure just further demonstrates this challenge.

The Burger Express was superior to some other more well known brands (I'm talking to you, Shake Shack), and for slightly less cash. I was disappointed to see it go Middle Eastern, but everything closes once I start going there. I wish I was here for Disco Donut.

Yup, ground floor was Disco Donut, and above it was Carmelita's Social Club. And Hippi Gyros was across 3rd on the corner of 14th. Something for everyone, lol

None of those links speak to the air rights?

It was indeed Disco Donuts; it was open for 24 hours, with counter service, had the best bear claws and apple fritters, and there's a shot of the interior on the movie "Panic in Needle Park".

And to those really wanting to know there was a Brothel/Massage Parlor on the East side of 3rd Avenue where that quasi-luxury building now stands. I remember I went up around 12 years old on a lark and almost became their youngest customer ever...:)

@6:14am: Don't worry, you didn't miss much; IMO, their burgers were overpriced for what they were, and their selection (esp. of side orders) was, to me, just a super-sized/expensive kind of fast-food place a la McD or Burger King.

And if I remember, the pizza place was the setting for a scene in Taxi Driver with DeNiro and Jodie Foster.

Desolate?! It’s always jammed with pedestrians and super busy when I’m over there. The on-going closure has made the whole area much more pleasant and less insane.

@5:30PM: I don't think you get it: Previously, people would take a taxi across 14th St. to 5 Napkin Burger (and many other places) to meet friends for drinks & to eat. But now you CAN'T take a taxi on 14th St. for more than 1 block, so I think 5 Napkin (and other places) lost a lot of spur-of-the-moment business. The places on 14th St. that still do well are VERY close to L train stops.

I don't think NYC nor MTA has EVER actually done any genuine research on how making the busway permanent has affected businesses on 14th St. Remember: the busway was supposedly ONLY going to be there while the L train tunnel was being repaired! But of course that was just one more lie told by NYC to sneak in a MAJOR change in road usage permanently, without any of us ever getting to vote on it.

and the former location of the donut shop...was it really called "disco donut", or is that just the nickname we had? this was back in the 80s.

It was Disco Donut; I used to live across the street.

Since when you're supposed to get your vote on things like road usage?

The guy buying the Italian ice in front of DD is my brother, Don Leslie. We both lived together on 7th st across from Leshkos, in a loft building owned by Rick and Renee Allman(owner’s of Cafe Bizarre). Don is a professional actor who does movies, broadway(twice), an lots of voice acting. The last time I looked, his loft sold for $4 million.
The real crime is that Variety Photoplays, around the corner was torn down.

Single story buildings are no longer allowed in Manhattan per order of the real estate development crowd.

@8:59 PM the whole not allowing car-traffic or parking is going to drop visits to local businesses is FUD and BS and has been so for years. Time and time again has shown, when making areas more pedestrian-friendly, time spent at local businesses goes UP!

Stop it with your pro-car propaganda.