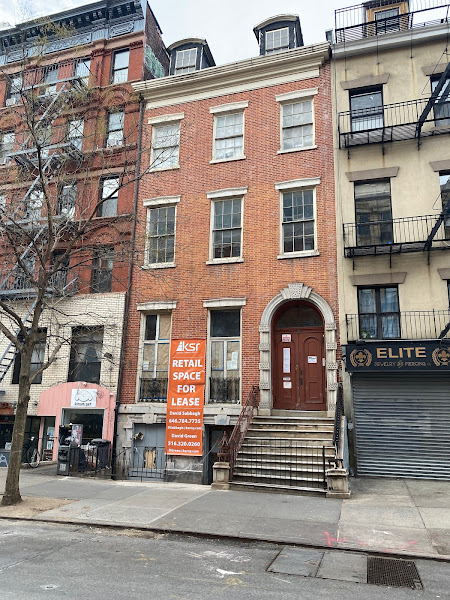 Our favorite building to write about here!
Workers recently removed the plywood after eight months from outside 20 St. Mark's Place between Second Avenue and Third Avenue... and, late last week, yet another for lease sign (for a different broker) arrived on the long-empty retail spaces...  hopefully, you can see the sign! 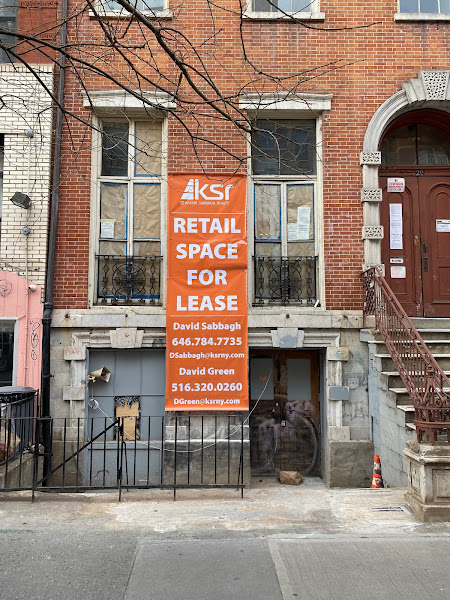 The dear, old Grassroots Tavern closed in the lower space after service on New Year's Eve 2017... ending a 42-year run on the block. The upstairs retail tenant, Sounds, shut down in October 2015, and the spaces have been vacant ever since.
As noted many times before, No. 20, the Daniel LeRoy House, was built in 1832. It received landmark status in 1971 and was added to the National Register of Historic Places in 1982.

Applicants for Ichibantei had been on the CB3-SLA agenda multiple times dating to November 2018 for a liquor license for a new restaurant in the former Sounds storefront. There was speculation that they were also taking the GR space.
And in recent years, we've seen some extensive gut renovations occurring inside the former Grassroots, where some pretty cool murals were uncovered from a previous business life.
Meanwhile, the new retail listing for No. 20 is at this link.
Previously on EV Grieve:
• New owner lined up for the Grassroots Tavern on St. Mark's Place

• Behold these murals uncovered behind the bar at the former Grassroots Tavern on St. Mark's Place
Posted by Grieve at 4:58 AM

There will never be another Grassroots. Spent a lot of time and cash in Sounds, as well. Past glories.