Plywood for the former Grassroots Tavern on St. Mark's Place 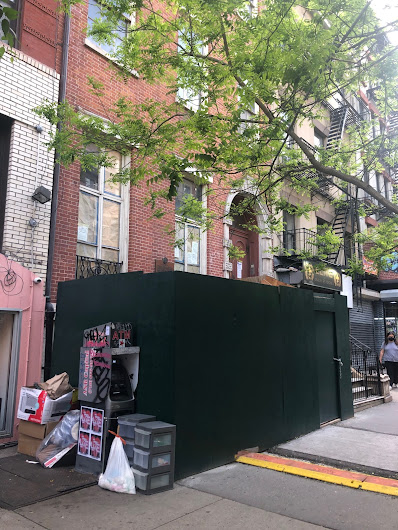 Workers put up this plywood yesterday at what was the entrance to the Grassroots Tavern at 20 St. Mark's Place between Second Avenue and Third Avenue.
We have no idea what's happening here. A DOB permit — filed in late April — simply lists the placement of a fence on the property.
We've seen some construction activity here off and on the past few years... though a look inside the door revealed a big empty space. (Once, we spotted a set of golf clubs and a grill.)
Hard to believe that the Grassroots has been gone this long already, closing after service on New Year’s Eve 2017... ending a 42-year run.
As noted many times before, No. 20, known as the Daniel LeRoy House, was built in 1832 here between Second Avenue and Third Avenue. (It received landmark status in 1971 and added to the National Register of Historic Places in 1982.)

After the Grassroots closed, Bob Precious tried to open a bar-pub here, but those plans never materialized after 18 months. It remains empty three-and-a-half years later.

Applicants for Ichibantei had been on the CB3-SLA agenda multiple times dating to November 2018 for a liquor license for a new restaurant in the former Sounds storefront upstairs. There was speculation that they were also taking the GR space.
Next? Dunno, aside from a lot of tags on that fresh plywood tapestry.
Previously on EV Grieve:
• New owner lined up for the Grassroots Tavern on St. Mark's Place

• Behold these murals uncovered behind the bar at the former Grassroots Tavern on St. Mark's Place
Posted by Grieve at 5:00 AM

I give it one day until the plywood gets tagged

The two floors above the tavern were also completely gutted a few weeks ago. I watched them carrying stuff out for days and got a few peeks inside while the doors were open.