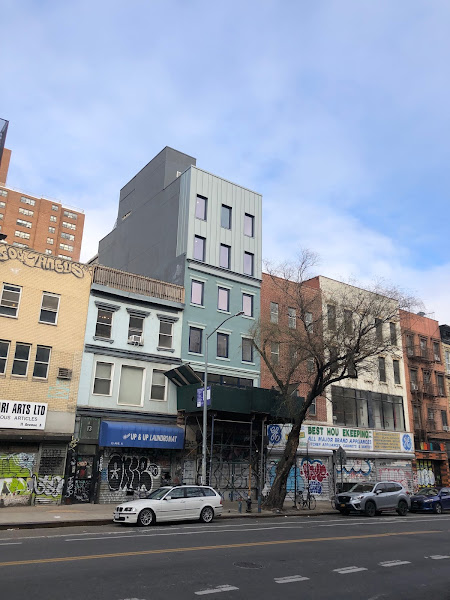 Late last week, workers removed the scaffolding and construction netting from the under-renovation 15 Avenue A... here's a look at the taller building now between First Street and Second Street... 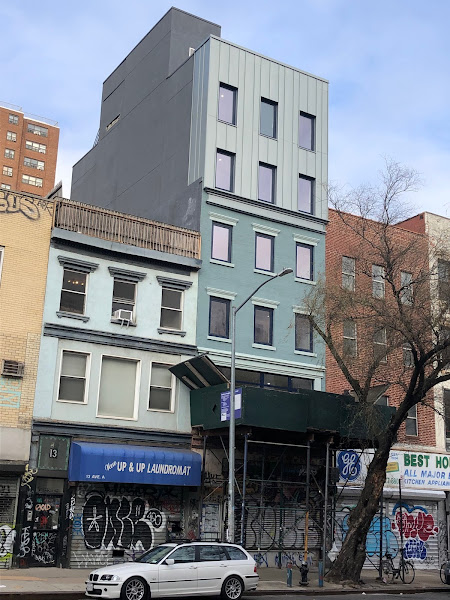 As previously reported, the currently vacant building received a vertical extension with two new floors, moving from four to six... with five residential units (likely condos) in the making.
The new retail tenant is expected to be a wine bar-restaurant from Bushwick-based pizzeria Roberta's. (First reported in September 2019.)
Community Board 3 approved a beer-wine location for the ground floor back in September. The minutes from that meeting show that this Roberta's will have 12 tables and 44 seats with one 12-foot L-shaped bar with four seats. Hours of operation were listed as 11 a.m. to midnight, with "Italian food (pizza, pasta, and salumi) prepared in a full kitchen, serving food during all hours of operation, no televisions, and ambient recorded background music."
The retail space at 15 Avenue A was previously the Family Dental Center, which moved down to Essex Street in 2017. The building changed hands in early 2018 for $4.3 million, per public records. Z+G Property Group is the landlord.
Posted by Grieve at 5:00 AM

Can't wait for Roberta's! Great addition to the neighborhood

Well, I guess they check the ugly building box.

It's no pizza Gruppo.

Its like J G Ballard wrote: the purposes of architecture is to blight the landscape.

I'm 100 percent Sicilian and had to Google salumi.

A stack of shipping containers would of been more interesting.

A stack of shipping containers would have been super cool!