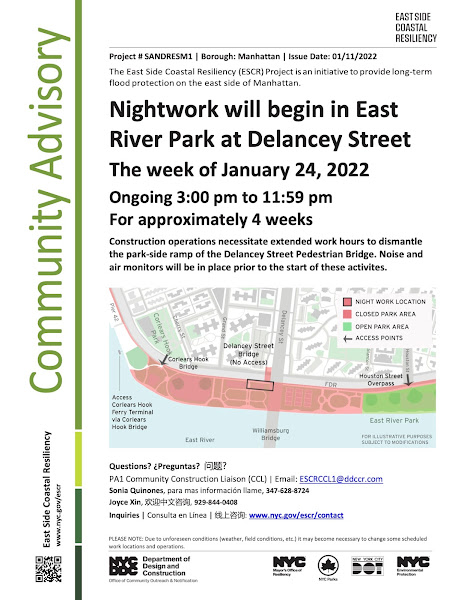 According to the weekly construction bulletin, night work begins in East River Park at Delancey.
The work is scheduled to take place between 3 p.m. and midnight for the next four weeks: "Construction operations necessitate extended work hours to dismantle the park-side ramp of the Delancey Street Pedestrian Bridge. Noise and air monitors will be in place prior to the start of these activities," the bulletin states.
The Delancey Street pedestrian has been closed since early December. The arrow in this photo shows where the demolition will be taking place... 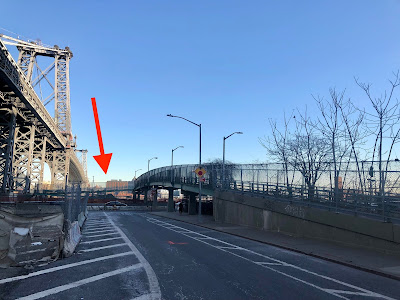 This won't be the first time for nighttime construction/demolition in East River Park as part of the $1.45 billion East Side Coastal Resiliency project. Work went around the clock on a weekend in December — also in defiance of a Temporary Restraining Order. (There wasn't any mention of late-night work in that week's construction bulletin for residents.)
Meanwhile, weather permitting, the "passive lawn" south of the now-gutted amphitheater is expected to open this week in the former compost area. Residents will access this section via the Corlears Hook Pedestrian Bridge, where passengers access the ferry.
Here are two views of the passive lawn, as seen on Saturday... 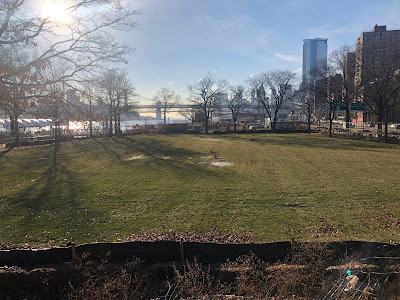 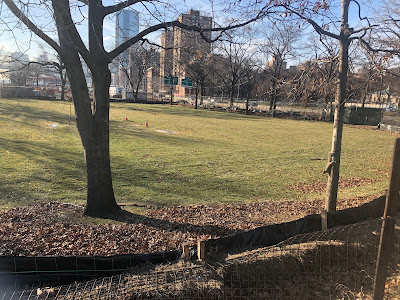 Updated: A reader said the passive lawn opened last week. (There doesn't appear to be any signage for it — at least I didn't see any.) And there are puddles of water on the lawn because there isn't any drainage...
Also, from Saturday ... here's the scorched-earth site of the former amphitheater... (click on the images for a bigger view)... 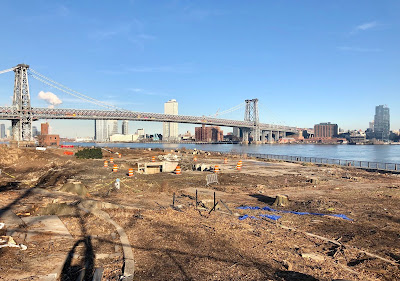 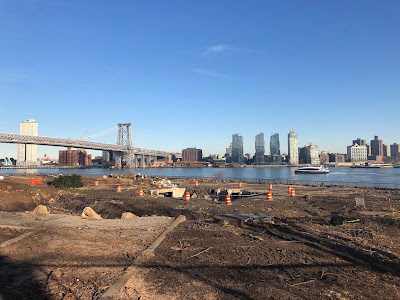 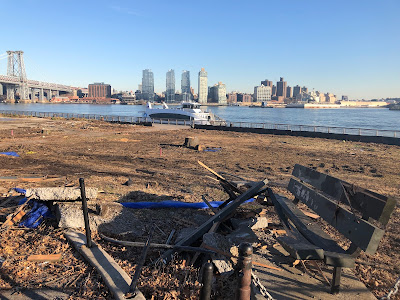 The city is to replace the now-demolished structure, which dated to 1941, with a smaller one at the exact location. In June, the city came up with $4.83 million to include a roof over the new amphitheater. (This post has more details.)
Since early December, work has focused on cutting down dozens of mature trees and taking out amenities such as the tennis courts in Project Area 1 below Stanton Street.
The current plans call for gutting East River Park — burying the existing 57.5-acre land under fill and elevating it by 8-to-10 feet above sea level. The new park is expected to protect the Lower East Side from storm surges until at least 2050.
Park entry remains at Houston, Sixth Street and 10th Street. The city has said they will maintain public access to a minimum of 42 percent of the park throughout construction, expected to be complete by the end of 2026.
Community members opposed to the current version of the city's floodproofing plan for East River Park continue to gather daily at 1 p.m. at the Houston Street entrance.
Posted by Grieve at 5:30 AM

The passive lawn is open but very damp. Parks police somehow didn’t get the memo as they told people to exit.

I'll miss that pedestrian bridge. It was cool. It had both ramp and stairs, providing a quick exit for faster moving people. Unlike the 6th and 10th street bridges, where invariably you get caught behind slowpokes who take up the entire width.

Any news about the East River Park these days is not good news. So depressing.

The trees that still stand around the former and future compost yard should be preserved. They will help that soggy lawn drain as their deep roots drink up the rain. With 6 lanes of traffic right there, these 33 mature trees and the remaining shrubs mitigate the endless vehicle emissions. The shade and sound of the trees are important for our health and wellbeing, and are a lifeline to other species - preserve all the trees south of this area too!

Welcome to our new parking lot/park that will have no shade for the next 30 years. Our pols really screwed us over on this one.

The passive lawn is the same thoughtless, uncaring design that the rest of this project so far is and will be. I went in to explore a few days ago--one section of fence removed, no path, no signage. Sunk down a couple of inches into an undrained bog and walked out with soaking wet feet. As for dismantling the bridge, I've asked a couple of times about whether there is lead paint on it, whether there will be mitigation if there is lead paint on it, if the air monitors will be actually installed before demolition (unlike the amphitheatre area), if the public will have any real-time access to the data collected by the air monitors, if the air monitors show anything alarming if construction will be halted... etc. And this is just the beginning. Just wait until they rip out more mature trees from Corlears Hook Park and the next 100 degree day with no shade mitigation... Shame on every politician who supported this plan.

Add to all this the knowledge that trees don't start to absorb CO2 til they're at least 10 years old, and in most cases 20. So once this unholy mess is built (shades of "Build The Wall, Build The Wall"), and the perfectly chosen little trees are planted, and then the wait begins for them to start working on the climate catastrophe heading our way like a runaway train, I guess we won't have to worry about any of it any more. But I'm terrified for the next generation. It's bad enough already, watching species blink out, seeing the damage done to people's homes by strange weather, and knowing that front-line communities all over the world are getting the worst of it. But every time I have an encounter with a little critter I feel like saying "I'm so sorry."

No one wanted this plan. Hundreds of community members spoke out about it at every hearing and town hall. The City is so determined to go through with it that they chopped down trees day and night even during bad weather despite a temporary restraining order obtained by lawyers for the community.

500 trees have been mulched. Nothing saved or transplanted.

SO many better ideas emerged from community workshops about how to protect us from flooding, and more recently extreme rainfall events. But none of us matter. Our lives, our health, our families, our friends, our community. None of us matter. We are as trivial to them as the trees. If they could make even more money by killing us outright they probably would do that too. It's cruel, immoral. We can only fight for what is left of the park and try to save our community.

Sadly, the master plan none of us poor people of the Lower East Side have been told about is that with us out of the way—thanks to inadequate flood protection—the city will be able to build luxury housing on prime land that the rif-raf didn't deserve. (We learned this in high school: "Some animals are more equal than others.")

The joke will be on them, because without the root systems of all the mature trees they will have killed, the luxury paradise will just wash away. One of their elder statesmen predicted it: "And like a miracle, it will just vanish!" (But he was talking about something else.)