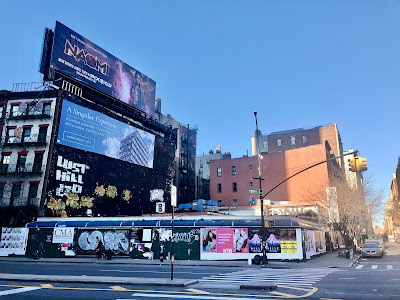 In the months ahead, the SW corner of the Bowery and Fourth Street will be transformed from the one-level former B Bar & Grill to a 21-floor office building, as we've been reporting the past year.
We just got the first look at the building coming soon... BRACE! Here's more about the project via the website of architect Morris Adjmi:

360 Bowery is a contemporary reinterpretation of the traditional glass office tower. Standing taller than most nearby structures, the new commercial building's tiered volume subtly twists, drawing reference to the different scales within its historic urban-industrial context while also responding to the neighborhood’s newer additions.

Designed to maximize views, 360 Bowery's façade is essentially a field of openings. The custom-built, high-performance unitized curtain wall system features dark gray painted aluminum frames and blush-colored GFRC spandrel panels in a fluted pattern that gets tighter as it moves up the building. Single-pane windows, measuring roughly 5’x10’, are inset within 10” metal fins. These deep, dark frames add a layer of shadows, further articulating the façade. As a lighter counterpoint, the building's corners are open and airy with a structural joint hidden behind the glass.

Terraces are also a defining feature of the tower. While the building's massing was largely influenced by zoning restrictions, the tiered volumes create opportunities for ample outdoor amenity space with views north and east, looking out over the Bowery and onto one of New York City’s most dynamic neighborhoods.

Leasing is underway, and there's an ambitious availability starting in the spring of 2023.
As previously reported, CB Developers paid $59.5 million for a stake in 358-360 Bowery, a gas station before its conversion into the bar-restaurant. B Bar owner Eric Goode, who owns a handful of hotels, including the Bowery Hotel across the way, assembled air rights to build the more extensive development on this corner space.
As for the B Bar, the one-time hot spot (circa the mid-1990s) was expected to close for good in August 2020. However, the place never reopened after the PAUSE in March 2020.
We first reported on this project in January 2021.
Previously on EV Grieve:• CB Developers pay $59.5 million for an interest in 358 Bowery — current home of the B Bar & Grill and likely a new development• B Bar & Grill lays off its staff without severance
• Permits filed to demolish the former B Bar & Grill on the Bowery
• First sign of the B Bar & Grill-replacing 21-story office building on the Bowery
Posted by Grieve at 4:59 AM

We really need to change the zoning. These's step backs are getting to be annoying, as architects and planners go arounds. They serve absolutely no purpose to anyone on the ground.

The next step in the death of our beloved neighborhood's death and evolution into "midtown south". One thing the pandemic has shown us clearly is that we need as much office space as possible because the future near and long term is commuting to Manhattan and working in an out of scale, misplaced and never should have been allowed to be built office tower.

it sure is singular. where else in manhattan can you get a soulless glass box?

There is nothing we can do at this juncture. Just like the demolition of the East River Park. We can grieve, yell, and become more angry, but nothing will mitigate the situation at hand. It won't get us anywhere. I spent a lot of energy fighting the closure of ERP. In the end, I am one person. My letters, calls and protests did absolutely nothing yet cause migraines. I ran errands around Soho and NoHo yesterday. Hadn't spent any time there since the pandemic broke even though I live in the EV. I barely recognized certain blocks with these gleaming buildings, especially on Houston and Mercer with the advent of the quite large, newly minted glass tower, which I believe is for NYU. Look, the city is changing around us and before our eyes. I like both the older and modern buildings for juxtaposition and context, but I can see how all of this disruption and visual monstrosity might be too much for some to process. Let's hope this isn't as bad as it seems.

JFC, can we get more stupid? Not only is this obviously hideous and out of character with the area, the developers must have been asleep the last two years as office culture has been decimated. Hate to say it, but they'd be better off building luxury condos.

What about the market oversaturation of unused office space post-COVID? Or am I missing something?

My eyeballs just threw up.

NYC is barely a city anymore, but instead a collection of half-empty useless developments and constant construction. Real cities have parks, trees, a variety of businesses some of which serve simple needs like shoe repair or books, restaurants that last more than a couple of years, a diversity of people and buildings, neighbors, people hanging out on benches, beautiful human-based architecture, "texture" and so on. I know, I know, I know. It's been heading this way for a good long while. But at this point I think maybe even the rich will get bored with what it has become. It's truly now a one-industry city: real estate development.

It ugly! And soulless. Lots of birds will probably die because of the reflections from the glass windows. Another de Blasio nightmare legacy.

Just a reminder to all, if you don't vote, I mean every primary, every election and don't tell everyone you know to vote none this will every change.

the only bright spot could be that someday this blight could be used for indoor growing cause it's basically useless as office space damn why can't they build some affordable housing for people who want to remain and build the community for the long term uggggg leeeeee glass box shame on you Mr. Goode shame

The governor would like to make zoning even less restrictive to build more monstrosities. Subscribe to Village Preservation to get regular updates and email/letter templates if you want to write to the powers that be. There will always be wins and losses, but we get absolutely nothing if we don't speak up.

I'm convinced there is just ONE set of blueprints and every one of these ugly glass buildings is exactly the same as all the others.

May the developers lose their shirts on this banal and unneeded eyesore.

That building is fugly in the most generic way possible. It really belongs on the Houston Street Horridor. Have any of these so-called architects visited Amsterdam in the last 20 years? They have managed to build some of the greatest modern architecture in a city where the oldest buildings are 800 years old, most are 300 years old, and yet it all works together. Their new architecture is bold, daring, and beautiful. Their old architecture makes you feel like it you have stepped back into another century, and yet it all fits together seamlessly. It’s almost as if their architects took into account the surroundings of every new building rather than just pull out an old drawing they did in grad school.

Rendering conveniently leaves out the 16 floors of 2 Cooper Square across the street.

Just read a new report detailing a niche affliction that's been circulating among some residents of the LES for some time now. They're calling it Soulless Building Derangement Syndrome. Unfortunately at this point there is no treatment or cure. Running down to the nearest park with arms flailing and shouting at the clouds until nearing exhaustion seems to temporarily reduce symptoms. Standing in a corner and holding one's breath is thought to useful as well. Anon comments on line have demanded more money be spent on treatment programs but so far the City seems to take no interest in helping these poor souls recover their minds.

Oh no! What happened to the height limit??? How I miss the B-Bar.

Not as ugly as postmodern faux-historic 2 cooper.

I hope they do keep the billboard there.

Doesn't anyone miss the gas station? (And the one across the street where the Bowery Hotel is?) Bowery Bar was reviled by many during its heyday, for both gentrification, and for late-night noise. Was this towering monstrosity the owners plan all along, playing the long game like the Walentas family in what is now Dumbo, Brooklyn?

In the West Village the courthouse became a branch of the NY Public Library in the 1960s. Behind the former court house, the 14 story Women's House of Detention was torn down in 1973-74 and is now a community garden. That outcome seems a fairytale in this New York.