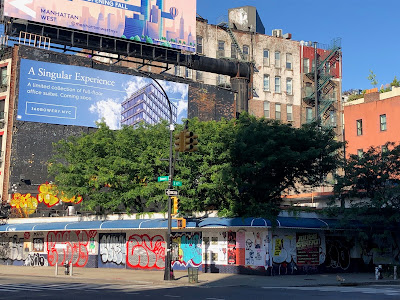 A banner ad for the new 21-story office building coming to the southwest corner of the Bowery at Fourth Street now looms over the space it's replacing — the former B Bar & Grill.
The ad, titled "A Singular Experience," touts the "limited collection of full-floor office suites" ... 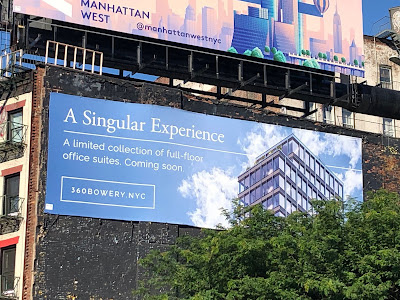 There's also a teaser site for the building, which will use 360 Bowery as its address. Per the site, with a Midtown-looking rendering, occupancy is expected in the spring of 2023...

Included is info about potential tenants in the ground-floor retail spaces:

As we first reported in January, permits were filed for a 21-floor mixed-use development — a 283-foot-tall office building. (For a comparison, the Standard East Village a block to the north is 21 floors.)
According to the proposed plan, the well-employed architect Morris Adjmi's building will encompass 98,799 square feet, with 26,000 square feet set aside for use as an unspecified community facility.
CB Developers paid $59.5 million for a stake in 358-360 Bowery, previously a gas station before its conversion into the bar-restaurant. B Bar owner Eric Goode, who owns a handful of hotels, including the Bowery Hotel across the way, assembled air rights to build the larger development on this corner space.
As for the B Bar, the one-time hot spot (circa the mid-1990s) was expected to close for good last August. However, the bar-restaurant never reopened after the PAUSE in March 2020. On April 3, 2020, nearly 70 B Bar employees were laid off without any extension of benefits or offer of severance pay.
Permits are on file now to demolish the single-level structure on the corner. This will be the second office building to rise along this corridor... joining the 10-floor structure in the works on Third Avenue at St. Mark's Place.
It will be interesting to see how the developers position this office space for a post-pandemic world. As WNYC/Gothamist recently reported, "Across Manhattan, office buildings are still suffering from a glut of available space more than a year after the pandemic sent workers home and shut down most leasing activity."
Previously on EV Grieve:• CB Developers pay $59.5 million for an interest in 358 Bowery — current home of the B Bar & Grill and likely a new development• B Bar & Grill lays off its staff without severance
• Permits filed to demolish the former B Bar & Grill on the Bowery
Posted by Grieve at 5:05 AM

Email ThisBlogThis!Share to TwitterShare to FacebookShare to Pinterest
Labels: 360 Bowery, B Bar & Grill

Glut doesn't quite describe the enormity of the situation.

Great another glass and steel eyesore that is totally out of place in the neighborhood. Surprising that it is going to be a commercial building rather than another high price residential apartment building.

There's an interesting phenomena at play here. The common complaint about the building not fitting in with the neighborhood architecture is now becoming moot. Over the last twenty years, basically every structure built is tall and made of glass and steel.

This is the new neighborhood, as much as I had to admit it.
From "Zero " Irving, down to Delancey and Essex, it has been the one common thread for all construction.- tall, boxy, glass/steel and, for the most part, uninspired. One thing you can bet on is their short life span.
One only has to look at 425 Park Ave to understand the future of all glass and steel buildings.

That's the come on. It'll be luxury shithead soon enough. There is a direct correspondence to luxury and the decline of the LES.

Looks like shit! Doesn't fit in with neighborhood at all.

All we can do at this point is come to accept it. What else is there to do? With the graffiti and the the building just sitting there doing nothing for all this time, something should take its place. More properties are now modern. At least there is some movement on this corner albeit it will be a nuance with construction and noise for quite some time. And yes, change is good overall even though some might not see it now. I like the juxtaposition of modern and old actually; it's very much like London. I'll get a lot of shit from commenters for expressing my opinion, but oh well. Have a lovely day :)

I was hoping they would bring back the gas station that B&B displaced. Not a single gas station in a 20 block radius.

It will be interesting to see what becomes of these built-on-spec office spaces. My company has switched almost entirely to remote work, leaving two floors of office space in midtown empty. They can't find a sublease and are looking at converting to shared workspace, which will likely not be successful given that the building is old and needs major renovation and there are so many new spaces for companies to choose. Companies are also re-evaluating what it means and costs to have office space in NYC. Smaller offices in other, cheaper, cities may be a better option. That Park Ave address on the old letterhead doesn't carry the prestige it used to.

Juxtaposition of modern and old is not the issue. It's scale. This is an abomination. Continue to resist please!

@10:11 AM
You are entitled to your opinion however you may have missed the part about how the developer was able to (legally) glue and paste together air-rights from other properties and ignore zoning laws for this neighborhood. This loophole was first used by Trump to build that oversized black glass luxury tower near the United Nations. Developer are extremely virulent in our city and state government and they back the campaigns financially of De Blasio and no surprise soon to be Mayor Adams. This is not about removing a single story former gas station, this is about opening a wide path to giant towers in neighborhoods south 14th Street so developers can cash in for the coming decades.

Am I reading the occupancy date right: This building will be ready for occupancy before Wegmans opens?

What is the demand for luxury office space at this location? I don't get it. Are people even back at the Death Star? The Essex Crossing office space isn't spoken for (as far as I've heard); nor is the space coming in where the Sunshine used to be.

So, essentially this is another brain-dead glass tower to be built for a roaring commercial-space market that does not exist now (and that may never again be what it had been).

The developer is going to put up a building that will likely stand empty (and be graffiti'd) ... and to what end??

I hope all these on-spec buildings are a massive flop & their developers lose their shirts on them, b/c that might (just might) slow the progress of the glass-ification of the LES.

And, BTW, how much will is it gonna cost to heat & a/c these glass boxes? It seems to me theses buildings are the opposite of what should be done, given current climate change issues/considerations.

I'm tired of buying clothes, so I am really looking forward to the "Clothing Rental Establishment"!

Amazing how the guy who sold this property was able to make millions but fired the staff at his restaurant without warning and didn't give them any severance.

@5:26pm: How do you think the rich GET rich? Not by behaving decently towards their 'underlings' that's for certain. (It also helps that the rich don't often have a conscience to bother them about such things.)

Buildings used to be constructed from local materials, mainly visible in local stone (like NY brownstone). These anonymous glass and steel boxes can be built just about anywhere.

Buildings used to be constructed from local materials, mainly visible in local stone (like NY brownstone). These anonymous glass and steel boxes can be built just about anywhere.

Yeah, I doubt they're all made of Corning™ glass.

There is that trashy building on lower 2nd avenue that has a minuscule amount of gold in all the bricks in its façade. I can't even with those "luxury" touches.