More details about the fire that destroyed the Essex Card Shop 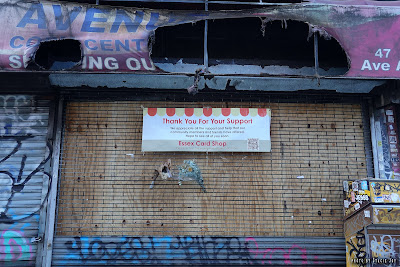 Photo by Stacie Joy
More details are emerging about the two-alarm fire that destroyed Essex Card Shop at 47 Avenue A on Jan. 10.
EVG contributor Stacie Joy first reported last Thursday that a 13-year-old boy had been charged with second-degree arson.
Julie Besonen filed a piece for the Times yesterday about the longtime business and its meaning to the community. (More on this in a moment.)
Besonen has details about the moments when the shop's management first smelled the smoke...

It was a typical Monday afternoon at the Essex Card Shop, an encyclopedic stationery store ... Business had been steady. Jayant Patel, the 80-year-old manager, had just noticed a teenager wandering around, before being hustled out by an older woman, perhaps his grandmother. Now the store was empty, the dutiful manager at his post, behind the counter.
Within minutes, however, Mr. Patel smelled smoke and saw flames in the back. He seized a broom and tried to snuff the fire out. It happened so fast that there was no chance to grab the fire extinguisher, he said. Soon, Muhammad Aslam, the shop's owner, arrived to find his loyal friend struggling alone to put out the fire. They called 911.

Meanwhile, Stacie received a copy of the Fire Incident Report, which listed the cause of the fire as "Incendiary — Combustible Material." Here's more from the report:

The fire spared the neighboring businesses between Third Street and Fourth Street — Exit9 and Downtown Yarns.
As for Essex Card Shop, Aslam estimated the loss, including inventory, to be around $300,000, the Times reports, noting the "aisles and its basement were bulging with inventory."
To date, supporters of the business have helped it raise more than $70,000 in a GoFundMe campaign.
Besonen has more about what the place meant to residents in the piece titled "Essex Card Shop Was Destroyed by a Fire. Its Customers Might Save It." (Disclosure: The article in the Times includes a quote from Stacie.)
Posted by Grieve at 5:30 AM

Thanks for the update! Hoping the shop is insured. The gofundme is great, but not sure it'll reach 300K. I almost visited the store the day before the fire, and now I'm kicking myself. Gather ye stationery while ye may.

I didn't know about the movie until now. Happy to see it's available on streaming services.

I donated once, but will donate again. Our neighbors need our love and support.

An accelerant? I was hoping this was some dumb kid thoughtlessly throwing away a butt into some papers. This one needs to be in an institution indefinitely.

The fire report posted above does not mention an " accelerant" nor does it presume the use of '"lighter fluid." Reading is fundamental.

And yes, let's put the kid in an institution before giving him due process, or better still perhaps he should be drawn and quartered in Thompkins Sq.

The mention of an accelerant was made by an FDNY official, and it was not in the report. I removed that reference from the post and added in the cause of the fire as in the report: "Incendiary — Combustible Material."

Hopefully, they had insurance.

Strange that The NY Times did not mention that 13-year-old had been identified as suspect.
That information was available prior to the Times article.

And yes, let's put the kid in an institution before giving him due process, or better still perhaps he should be drawn and quartered in Thompkins Sq.

In my parallel universe, it's the people who misspell "Tompkins" that are drawn and quartered.

Thanks for playing; we have some great consolation prizes for you.