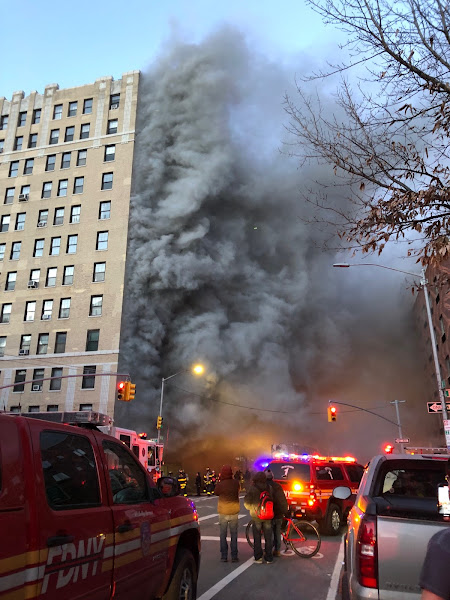 Updated: Saba Aslam, the daughter of owner Muhammad Aslam at Essex Card Shop, has launched a GoFundMe campaign to help rebuild the business. Find the link here.
The FDNY is responding to a two-alarm fire that started inside the Essex Card Shop shortly after 4:30 p.m. at 47 Avenue A between Third Street and Fourth Street.
It was a frightening scene as thick black smoke hugged the east-facing wall of the Ageloff Towers.
The early word is that the shop has been destroyed. 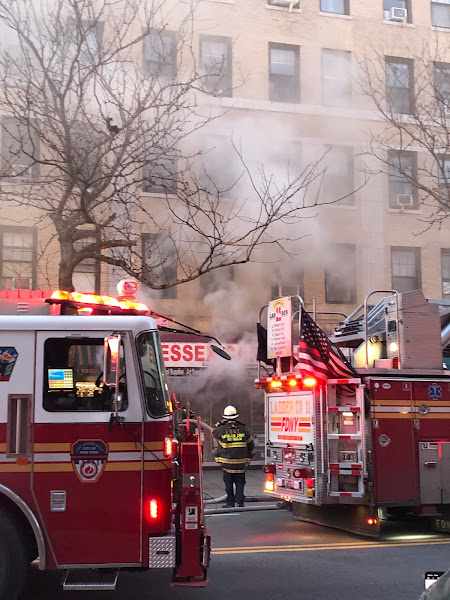 No word just yet to damage other businesses here or the apartments above in the Ageloff Towers. 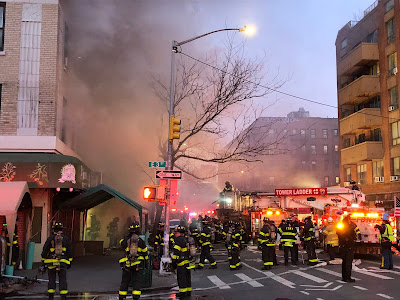 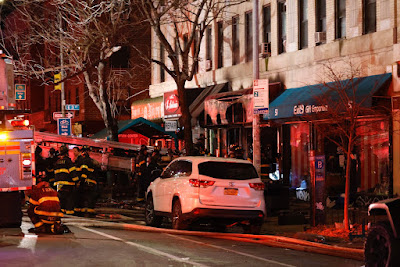 Everyone is reported to be safe. EVG contributor Stacie Joy spoke with Muhammed and Jayant at the Essex Card Shop. Unfortunately, the shop is in ruins. Jayant said that he smelled smoke coming from the bathroom in the rear of the store and immediately called the FDNY. Both of them said they were grateful that no one was hurt.
In addition, they both said that they would come back from this.
Next door at 51 Avenue A, everyone is safe at Exit9, which sustained minor water and smoke damage. Downtown Yarns appears to be OK as well.
A fire official told Stacie that the cement ceiling and brick walls in the storefronts served as a firebreak and prevented further damage to the building.
We've heard reports of residents who had to evacuate the 13-floor Ageloff Towers above the shops. The resident reports say that this was done safely, and there weren't any reports of injuries. No word on damage to the residential units above the shops.
EVG reader Eric FG shared this photo of Jayant shortly after the report of the fire... 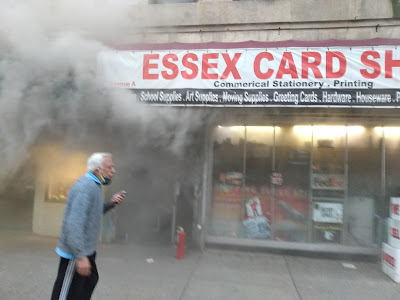 Please let me know if anyone is setting up a go fund me or something like that!

Horrible! And the smoke looks like total inferno!
I hope everyone is safe.

Oh no, they just moved. So sad. Prayers up to all.

Any word on damage to Exit 9 next door? Is it lost as well?

Tragic, they are the best.
So important to the neighborhood

OMG, my heart is BROKEN! Essex Card Shop is one of the best businesses in the neighborhood and I make sure to get all my stationery there. I was just in there a couple of days ago and can't imagine the loss. I hope no one was hurt. The owner is one of the kindest people. Please let us know what we can do to help him.

So tragic! They are so kind in the store, I always go there to use the printer

This is beyond tragic. Mr. Patel and his staff are always so kind and helpful. Essex Card Shop is more than a paper and office supply store. I sometimes spent a half hour there just looking around at the huge variety of things they offered. I always went there for reasonably priced home office supplies, fancy boxes and wrapping for holiday gifts, toys, and notary public services. It is a real East Village institution, and I always gave Mr. Patel my business instead of the chain stores like Target. I can't imagine how he is going to recover from this with hundreds of thousands of dollars in merchandise that is probably a total loss. I hope that EVGrieve posts a authentic GoFundMe link (watch out for criminal fakes). Mr. Patel, I am so sorry this has happened to you and your staff.

Love This store ! Owner is always so nice and friendly . Happy he is okay!

Lovely people and a great store - such a tragedy. Please keep us posted on their recovery.

oh, no! So sad, I really hope they make it through this. The shop is so great, and they are so great.

Yes. I am crying. I love this store so much and buy notebooks for my students here. It is essential to our neighborhood. The owner, is also a writer. I am grateful he is okay, but this place is his home and ours. This is unbelievable.

The Essex Card Shop is a NYC treasure. Jayant is always so friendly and helpful. I hope there are ways to support them as they rebuild.

terrible news! extremely glad everyone is ok, but so sad about essex card shop, long a jewel of the neighborhood. cheers to the owners for their positive spirits regarding coming back, and yes, i too beg someone to establish a gofundme so i may pour my dollars and goodwill into it.

Hopefully insurance money will cover the loss and rebuliding. In a week when adults and children unnecessarily died of smoke inhalation in the Bronx, we should go easy here with the "beyond tragedy" exaggerations.

We love Essex Card Shop, go there at least weekly, for printing, mailing, art supplies, office supplies, notarising. Yes please let us know if there is a gofundme. We live in the building by the way... all is well, as far we know... Our hearts go out to Jay and owners. Please come back...

I was so sad when I saw his daughter post that this story is his whole life and livelihood. Please someone start a gofundme. This store is everything

Please post a GofundMe if available, so tragic for the shop owner. They just moved here and are a neighborhood staple. We love them and his handouts of wisdom!

So glad there were only minor injuries. Really hope the shop had adequate insurance.

Just pasting the GoFundMe (linked in the story) since a number of people in the comments are looking for it to contribute to!

Terrible news! One of the few "everything" stores left in NYC. And the people there are so nice!

I love Essex Card Shop, wonderful store and owner,been going there for so many years. I am so very sorry to hear of this. I do hope it revives and would like to help if I can.