Once again, 3's company for Amelia and Christo, the red-tailed hawks of Tompkins Square Park 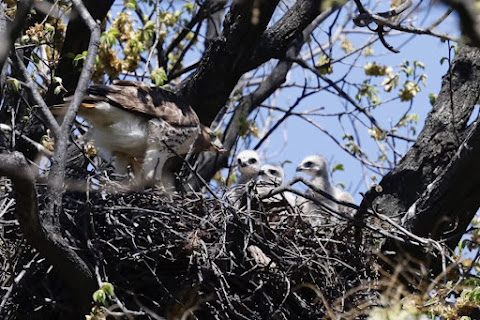 Photos by Steven
As you may have heard/seen, Amelia and Christo, the resident red-tailed hawks of Tompkins Square Park, have three chicks in the nest this spring.
Local red-tailed hawk documentarian Goggla first noted their arrival last week. Per her timeline:

The first hatch was April 17, but we were not able to see any of the nestlings until April 25. A second chick was seen April 27, and the third on April 30.

Check out her site for more on the hawks — and other NYC wildlife.

The chicks are, as always, growing quickly... and coming into view for the hawkarazzi ... 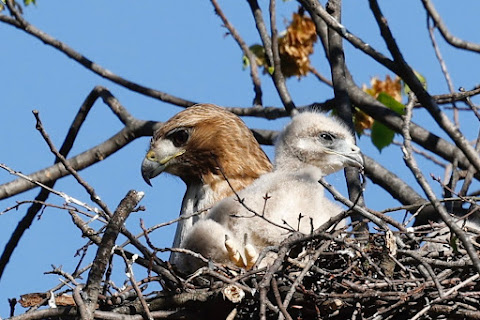 This is the third consecutive year Amelia and Christo have hatched three chicks. Last year, just one of Amelia and Christo's three offspring survived. However, all three survived to fledge in 2020.
Longtime hawk regulars may recall when Christo and his then hawk-pal Dora set up the nest in more precarious quarters, like an AC on the Christodora House (2014) or the Ageloff Towers (2015). 🙀
Posted by Grieve at 5:30 AM

OK, got my entry-level binoculars now, going to try to make some use of them this year!

Love the energy of the birdwatchers in the park.

Great job, Steven, to get all thee chicks in one shot!

Thank you for sharing these photos!
And I read at the end of Goggla's post a reminder of these urban yet wild creatures, and didn't realize that drone/safety can offend these birds (I mean, with her note and thought, of course it would). Just a good reminder to respect nature.

The chick's are so cute 😍