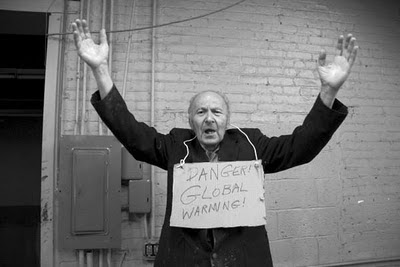 My friend Karen Lillis passed along a link to me the other day about Bingo Gazingo, described by the Times in 1997 "as the near-toothless underground performance sensation." The author of such songs as "I Love You So Fucking Much I Can't Shit" died on New Year's Day from injuries that he suffered after getting struck by a cab. He was 85.

Life Just Bounces had a lovely tribute to the man:

You'd hesitate to call him a celebrity by any stretch of the imagination, but New York street/performance poet Bingo Gazingo's obscurity likely served as an aid to his singular imagination and oddball creativity.

With his often crude, spiky, agitated and hilarious rants about sex, dementia, and, especially, popular culture, Gazingo (born Murray Wachs in Queens in 1924) was a Monday night regular every week at New York's Bowery Poetry Club. He was struck by a taxi on his way to one of these very events, presumably on December 28th, and died on New Year's Day.

As Karen told me, "Bingo was wildly unique, and relentless at what he did."

The Times wrote about Bingo in Janaury 1997:

As a young man, he says, he worked as a logger for Broadcast Music Incorporated, or B.M.I., the music licensing agency, sitting over radio play lists with a blue pencil, identifying songs for which the company was entitled to royalties. And then, he says, he disappeared into the United States Postal Service, where he worked for decades sorting mail and loading trucks. "Doing that is like spending 20 years in one day," he says.

But through it all, he says, he never abandoned his dream of being a songwriter. He wrote ballads, novelties, show tunes, country-and-western songs, anything he thought would sell, and left them at stage doors at the Roxy, the Paramount and the Strand, in a time-honored tradition "to try to get my songs to the artists."

"But they never took one of my songs," he says, waving his hands at the memory. ''I thought I would be discovered or something, but it doesn't work that way."

I always intended to go see Bingo one of these Monday nights, but I never did. Wish I would have taken the time to meet this NYC original....

Listen to some of his music here:
http://www.myspace.com/bingogazingo