Will New York City gets its very own Whopper Bar? 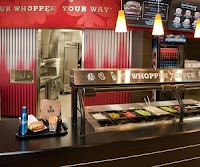 The restuarant chain is set to open a Whopper Bar, offering hamburgers and beer, in the South Beach section of Miami in mid-February. USA Today reported Friday that more Whopper Bars could be coming to hot spots such as New York, Los Angeles and Las Vegas, according to Chuck Fallon, president of Burger King North America.

At the Whopper Bar, beer will be served in aluminum bottles to keep them cold [an EV Grieve intrusion: how novel!] and cost $4.25. A Whopper combo with a beer costs $7.99, roughly $2 more than the same combo meal with a fountain drink.

The Whopper Bar concept offers hamburgers such as the Whopper, Double Whopper or Steakhouse XT built by employees known as a Whopper-ista.... There are 22 different toppings to choose from to build your sandwich. 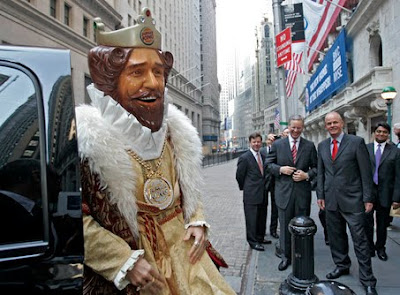 Email ThisBlogThis!Share to TwitterShare to FacebookShare to Pinterest
Labels: shit you can't make up, WTF