Spotting an artwork ad on a cab

Thirty days into the month yesterday... I finally spotted one of the new art ads atop the ads...(the one on the right) 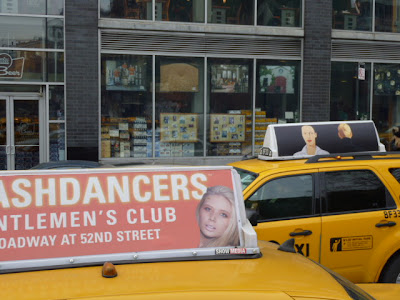 As the Times reported back in December:

[F]or the month of January, Show Media, a Las Vegas company that owns about half the cones adorning New York City’s taxis, has decided to give commerce a rest. Instead, roughly 500 cabs will display a different kind of message: artworks by Shirin Neshat, Alex Katz and Yoko Ono.

Previously on EV Grieve:
But how will we know what reality show to watch or strip club to hit?
Posted by Grieve at 9:00 AM

This explains things! I saw a cab with just a black and white sketched eye...think MC Escher, and I was thinking, "what in the world is that advertising?!"