Donald is well and missing the East Village 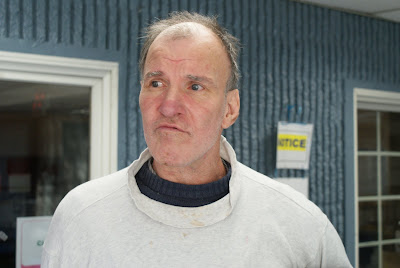 On Dec. 30, I wrote a post on Donald, a longtime East Village resident who had been evicted from his home earlier in the fall. I was unaware of what had happened to him.

This week, I was grateful that Neil Janowitz, one of Donald's former neighbors on East Fifth Street, sent me a note with updates... Neil has visited Donald several times the last six weeks or so. Neil also filled in some of the biographical information that I was curious about (and he provided me with the new photos on this post). "His full name is Donald Baumgartner, he's 58 years old and he loves himself some Jackie Gleason," Neil told me.

What follows are some excerpts from an e-mail exchange between me and Neil:

I was out of town when he got evicted, and came home to find an eviction notice on his door. Our landlord confirmed that he had been evicted, but would or could not tell me where he had been relocated. A few weeks later, I happened across an old entry in the journal that described Donald telling me about 11 Park Place, which he said was the source of his money. ... They informed me he was in the psychiatric ward at Bellevue, and that they were looking for a place to permanently move him.

I visited Donald at Bellevue in late December. The man looked good, but was hell-bent on getting out. He asked a lot about 5th Street — about his old apartment (it's being extensively renovated by an eastern European construction crew that has an affinity for Lady Gaga tunes), the tenants in our building ... We spoke for a half hour, and I left him with my phone number. A couple weeks later, he told me during a call that he was being discharged on January 12. I asked where he would be going, and he said he didn't know.

A week after that, I got a collect call from Donald. Figuring I could just call him back at Bellevue, I declined the charges and called his ward. The nurse on duty told me he had indeed been discharged that afternoon. I asked where he was. She said she didn't know.

I panicked briefly about having refused Donald's call, but he tried again five minutes later. I accepted, and he told me he was at East Haven Nursing Home in the Bronx. Way up in the Bronx. He gave me the address, and a friend, Molly, and I visited him on Saturday. For reasons the receptionist couldn't disclose he is considered a "high alert" patient, meaning Molly and I couldn't talk to him in private. We had to drag a bench and chair into the lobby and catch up with him there. He's even saltier about being in the nursing home than he was about Bellevue, and spent the majority of the visit asking Molly and I to write a letter to the resident social working requesting his discharge. He then showed me a note the social worker had given him. It said he would be discharged on July 2. I have to wait and speak to the social worker to find out where he'll go at that point.

Donald never mentioned any family other than his sister, Anne (died in January '08), his mom, Anna (died in 1993) and his father, whose name Donald either didn't know or didn't want to share. He didn't get along with his father, who died in 1968.

I know he had been in the 511 E. Fifth St. apartment for 25 or 30 years, and prior to that was in another building on 5th Street ... His place in 511 was a trip. Like a time warp. No one had renovated it in two or three decades, so it had a bathtub in the kitchen, two interior bedrooms with windows that looked out on the living room and lots of built-in cabinets and trunks. The floor was so badly worn that you could see various layers / flooring styles dating back an unknowable amount of time.

Yeah, he's jonesing for the East Village. He asked if he could move in with me. Though, interestingly, when I asked where else he would want to live, he mentioned Brooklyn. Said he's been scouring the Daily News for listings out there. But he didn't know which neighborhood he would want, and couldn't specify what he liked about Brooklyn. 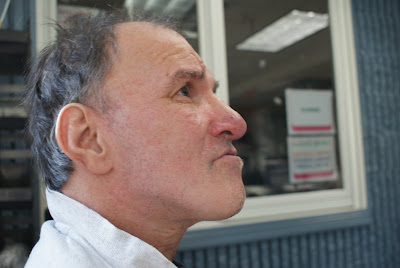 Previously on EV Grieve:
Gone but not forgotten: Donald
Posted by Grieve at 7:00 AM

Neil, you are awesome. It's wonderful to hear that Donald is okay and being cared for. A lot of people were wondering and hoping. And thank you EVG for getting the story out. We may never have heard.

Once when I gave Donald a few dollars and wrote a sign for him, he asked me where I lived. I told him I live in Brooklyn and he asked if there are any cheap apartments there, or if he could live with me.

Perhaps when he's able to be released, Donald can get a spot in one of the places in the neighborhood that provides support services.

Thanks for the update. I've known Donald for several years as I worked at Le Tableau below his apt. I had heard that he was taken to a hospital but nothing else. If Neil or anyone speaks to him, please tell him "Mrs K." says "Hi!"

You are a wonderful neighbor and a testament to how great New Yorkers are to each other. Well played. I hope Donald can find a new home that he likes.