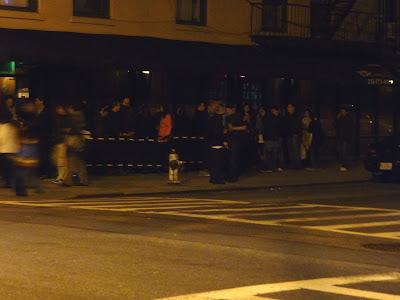 The premise of the article: "So for those under 21, here are some fun options for your weekend entertainment that you might not have considered before." To the endorsement of Horus!

Horus Cafe is usually crowded and poorly ventilated, resulting in thick smoke hanging from the ceiling at all hours. But its East Village location is definitely convenient, as evidenced by the swarms of underclassmen who frequent the hookah joint on East Sixth Street and Avenue A on the weekends. DJs spin Top-40 songs and belly dancers drift about Thursday through Saturday nights, adding spice to an otherwise mellow night out. Sample the Middle Eastern menu while you're at it, and you won't be disappointed.

Swarms of underclassman...poor ventilation...smoke hanging from the ceiling... why not just call the DOH too?
Posted by Grieve at 6:36 AM

Who writes this crap? Or better yet, who edits it? That shithole is on Avenue B, not A... I miss the Cajun restaurant that used to be there...