Where donuts were once served, a grocery store opens

From the Department of That Was Really *&%$##@@* Fast... The corpse of Dunkin' Donuts is still warm and, possibly, a little glazey...and on Second Avenue, the first of the two shops have opened in DD's old space... a deli/grocery... 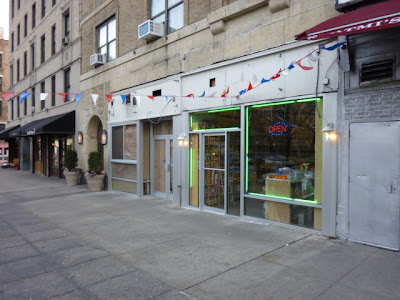 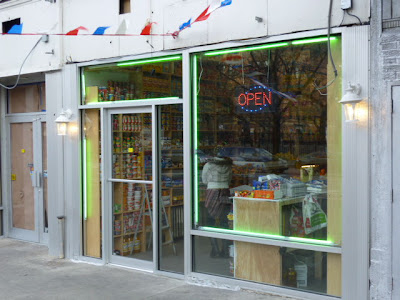 Jeremiah first had the news of DD's split future... Meanwhile, some folks are still in mourning... from Let's Do This Instead (via Eater):

It would sound strange that I’d think the biggest loss in the East Village would be a Dunkie’s. But the one on Second Ave. between 10th and 11th was one of the nicest neighborhood amenities ever. Where else could you sit on the sidewalk with free wifi, or at a counter by their picture windows in winter, and look out onto one of the oldest buildings in New York City, St. Mark’s Church (built in 1799, and just imagine everything it has seen grow up around it for over two centuries).

Dunkin' Donuts Week in Review
Posted by Grieve at 6:50 AM

I have nothing against a grocery, but I really did love that window and the view. Maybe they could put some benches out front...

not surprising to lament dd's from someone who voted for bloombeg

I don't know if you reported this already, but it's terrible. The old Max Brenner on 9th and 2nd is turning into an HBSC!! There are already 2 Chase's and a Capitol One within a block and now we have another bank : (

Thanks for the comment, anon... Yeah, that's really unbelievable about yet another bank branch...

What was the space before it was Dunkin' Donuts? I've lived here since 1968 and I can't even remember...must be all that, uh, LDS I took back in the 50's, yeah, that's it... I remember the gourmet shop next door, where Urban Outfitters is now, but that's about it...

The Bini Bon was around here--it was a great hippy place and bakery .