At Cafe 81, you'd better be quiet or someone will throw a shamwow at you

We've been really curious about what has been going on with Krystal's Cafe 81, the former Verchovyna Tavern aka George's Bar aka Bar 81, on Seventh Street near First Avenue.

As we reported last fall, the bar closed in September for a "vacation," with a reopening on Oct. 1 sign. Well, the place was shuttered until the middle of January. Then, without any fanfare, it quietly reopened with a happy hour. 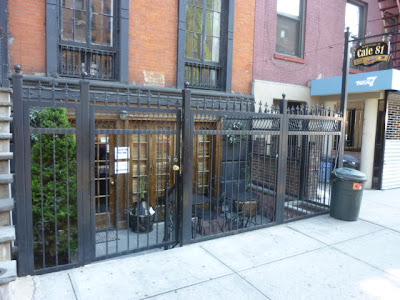 Things apparently haven't been so quiet of late. An EV Grieve reader noted that the bar recently started a "rockaoke" night every Friday. According to the reader, "It's a live band — amped — with mic'd DJ, doing karaoke ... doors open, screams, etc. The place is packed, with a bouncer, and kids spilling into the street."

Perhaps some folks have complained about the noise... which may explain this new sign that went up on the door... one of the oddest noise signs that we have ever seen... 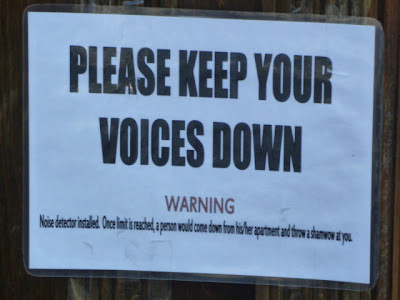 "Noise detector installed. Once limit is reached, a person would come down from his/her apartment and throw a shamwow at you."

And will you say "Wow" every time you're hit? (And does a shamwow really hold 12 times it weight in liquid?)

Meanwhile, a recent article in Philippine News offers a look at the new bar and chef:

Café 81 is the recent reincarnation of Krystal’s Café in Manhattan, which once was a Filipino Karaoke oasis on First Avenue before a Japanese noodle bar took over the location.

Café 81’s vision, Tuazon said, is to balance popular appeal and authentic Filipino cuisine, which is a tricky challenge given the fast-paced food trends and shifting Filipino population of New York City.

When the acclaimed mainstay Elvie’s Turo-Turo closed in Fall 2009 after almost two decades on 13th Street, it pointed as much to the pressures of the economy as it did to an evolving community.

The space inhabited by Café 81 is a testament to the East Village’s ethnic and immigrant communities.

The bar has stood in the same location for over 100 years and was once home to an Italian restaurant, and before that, an Ukranian dive bar.

In the East Village, Filipinos created something of a Little Manila in Manhattan with a revolving door of Filipino businesses and residents. Their visibility was boosted in the 1980s by professional recruitment to the area’s many hospitals, combined with offers of subsidized housing in the midst of ongoing rent strikes in the neighborhood. Many longtime residents and businesses, including Elvie’s, watched the gentrification of the East Village and arrival of new condos and NYU-owned properties.

Karaoke is serious business in the Philippines. Did you read the NY Times article on the "My Way" killings earlier this month?

this place seriously sucks. they are the worst neighbors ever. i don't get why they can't get their act together and manage their loud customers. it's not that hard. idiots.

Not so much vacation, go look at restaurant Inspection Information

I used to work at Bar 81, which was an old Ukrainian bar in the same location. The upstairs neighbor was a complete nutjob and complained about the noise and the smoke ALL the time. At some point, she should have just moved. You know where you live...