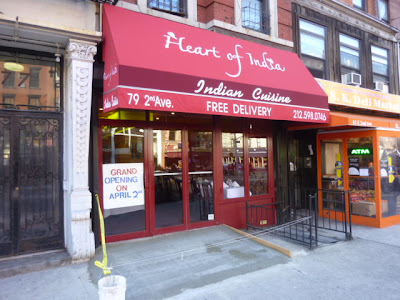 Heart of India opens today at 79 Second Ave. near Fourth Street. As a commenter said, the new restaurant is owned by the folks who ran Curry Majal across the Avenue...(their rent got jacked up to $9,000 a month...)

Madras Cafe was here earlier... Not to cast a pall over 79 Second Ave....However, the address was also once home to the Binibon. As we've written before, on July 18, 1981, Jack Henry Abbott, the celebrated ex-con writer, got into a fight with the cafe owner's 22-year-old son-in-law, Richard Adon. Abbott stabbed Adon in the chest, killing him. Ephemeral NY has more on the crime here.
Posted by Grieve at 6:39 AM

the signage is almost identical to the new Seven Rivers of India.

1.) I am sooo happy because the old Curry Majal was the neatest little secret in the vast pool of Indian restaurants. Nice owners / waiters. Good reasonably priced food. No scary flashing lights about to explode and burn the place down and no NYU Birthday parties...ie a quiet place to eat. Hope they can keep that vibe.

2.) Binibon was the corner of 5th Street, not mid block.

Yeah, this wrong address for Bini-Bon is really making the rounds. Youd think I could find an archive picture of it (there was a picture in every paper at the time of the murder)
Anyway, found this:
http://tinyurl.com/yz53tjs

Heart of India is amazing. Yes, it's the same food, same chef, same people... same restaurant, basically... as Indian Curry Mahal, which modestly sat on the east side of 2nd Avenue since 1978 (impressively, particularly in this city, in this neighborhood). The only difference, really, is the name and the design (perhaps more minimalist, more modernized) and the fact that the new restaurant seats 60, not 24 (if I'm correct).

At Heart of India, you won't get the trash (pardon me) of the 6th Street Indian restaurants, what with people standing outside, trying to lure you in. What you will get is good people, great food, and great prices. The quality of the meat and rice used by Heart of India is quite prime. I dare say the chicken curry is the best in the entire East Village.

Heart of India is amazing. Yes, it is the same food, same chef, same people... same restaurant, really... as Indian Curry Mahal, which sat modestly across the street on the east side of 2nd Avenue from 1978 until late 2009. The only difference, really, is the new design, which is more modernized, more minimalist, perhaps... but which seats more (60 instead of 24, I think).

At Heart of India, you won't get the trash (pardon me) of many of the 6th Street Indian restaurants, what with people standing outside, trying to lure you in, etc. What you will get is great people, great food, and great prices. The chicken curry is probably the best in the East Village. The ingredients are clearly superior to most Indian restaurants.

I'm just another restaurantgoer, but Heart of India is pretty much the best of the best.

I went to Heart of India's opening night celebration and I (as I told my friends throughout the evening) the happiest guy in New York. It was amazing.

Here's how it all happened... Seeing people dancing in the window of an indian restaurant, I was intrigued. Hearing from two girls smoking outside that there was free food inside, I went in. Finding out that the house rule was that everybody was welcome provided that they danced or sang for the crowd, made me fall in love.

Early in the night, friendliest hosts and owners I've ever met pointed across the street to the deli (that they also own) and suggested we pick up some beers. Later in the night, when our supply ran out, the host ran across the street to grab a few so that our impromptu bollywood inspired dance party wouldn't end. At the very end, the three daughters of the proprietors (maybe 10-16 yrs old) hugged us and thanked us for letting them teach us how to dance.

- The happiest guy in New York