With Graceland's closure comes a loss of community

As mentioned last night, Graceland closed for good on Avenue A and Second Street ... 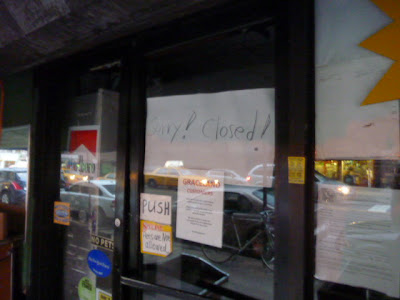 Twenty-five years ago, there wasn’t much shining on Avenue A past midnight: In 1985, the hottest businesses in the area pushed heroin, not cupcakes. Graceland was transformative. Not only was it a place to get cilantro and light bulbs at four in the morning, it was part of the community. Halloween candy was handed out; if a regular didn’t show up for a while, they were asked about...

Rumor has it that another grocery may come in its place. Better than a bank, I guess, but you can get find food on pretty much any block in the neighborhood now, from vegan to gluten-free. What you can find less and less, however, is something far more important: a sense of community. 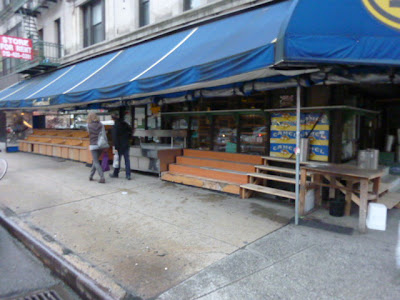 Graceland addresses its customers
Posted by Grieve at 11:56 AM

How do you expect a small business to thrive when the city and CB3 have allowed a methadone clinic, mentally ill housing & low income housing (NYCHA) all on one city block?! Do you really think any business will do well here?? I hope Gracefully survives...

Why hasn't the NYCHA leased its stores on the west side of the block? These stores have been sitting vacant for years now...

It did thrive, Anon. It was the rent that caught up with them, nothing more, at least as far as I know.

Don't get MS if you want to keep your grammar & spelling afloat!

oh my, and what is the meaning of this nugget: The FiDi location?

FiDi??? That for Financial District; it gets a cute name now?

Okay, enough for one day, I was working across the street from Graceland, and I am baffled about where to buy my marlboros now!

WHAT, I quit smoking 3 years ago? What the fuck is going on in this neighborhood?

I first lived on this block in '82
(the Nicky's - TG-knock wood - of the street to start out, then after 18 years bartending across the street,

- they weren't ALL angels, and one lady had a DELIGHTFUL meanstreak about carding people for smokes when they had already been buying them THERE for 18 yrs... Still making me grin when I remember her stubborn insistance; "what's this, this not your ID"

Really, after I quit, I meant to stop in & demand some free matches for all the years I was using a lighter! I miss the younger beautiful woman who had such a sly sense of humor...

Ah, we were so excited at the bar when there was going to be a business open across the street, with LIGHTS and TAXES... (cue carousel music)

... so nice after the nickname "Stop N Cop" really did suggest ONE true nature of the bar...

Okay, I really can't hold one thought in my head this long, so if I quit now I will have exposed only the tip of the rant-berg....

Grace is a smart business woman and she and her employees will do just fine. They are opening up a new store on the Upper West Side this summer on West End Ave & W 64 St, near all the shiny gleaming Trump buildings, where rents are high but at least the people can afford to buy her goods.

You are inimitable, scatterbrain. xo

BaHa!
I have never been so tickled to be sent to the dictionary!

This block definitely does not have enough bars or nightclubs what with that methodone clinic taking up all the valuable real estate.

Just came home from vaca last night and we were really sad we missed the closing. Hopefully things will be up and running soon, especially if it brings back some of the old cast. It's weird how dark it is on that corner now. Depressing.