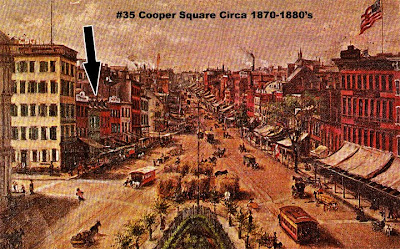 35 Cooper Square, an active part of the Lower East Side community for nearly 200 years, died yesterday following a short bout with new developers. The cause was impending demolition, said the New York City Department of Buildings.

The oldest building on Cooper Square, and one of the oldest buildings of the original Bowery, this charming Federal style building with the traditional gambrel roof, twin-pedimented dormers, and large end chimneys also boasts historical and cultural associations ranging from a direct descendant of Peter Stuyvesant to much later habitation by Diane DiPrima, the most influential woman of the Beat Generation.

"[W]hen I first laid eyes on 35 Cooper Square, I knew it was the fulfillment of all those fantasies of art and the artist’s life, la vie de boheme ... it was my dream house," DiPrima wrote in "Memoirs of a Beatnik."

Originally called 391 Bowery, 35 Cooper Square was owned in the early 1800s by Nicholas William Stuyvesant, great-grandson of Peter Stuyvesant. When he died in 1833, the building passed through several hands, including an undertaker, a teacher, a hotelier and a saloon owner. 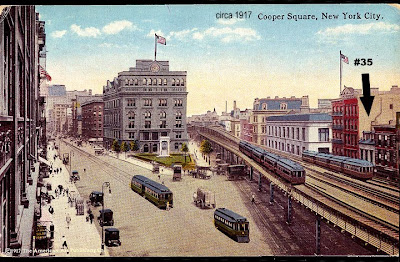 According to Jeremiah's Vanishing New York, "In the 20th century, it became a home for artists. Painter and photographer J. Forrest Vey lived there after World War II. He rented the upstairs dormer rooms for $5 apiece to people like Joel Grey, star of 'Cabaret,' and Claude Brown, author of Manchild in the 'Promised Land.'"

"This much-beloved little building has been both a significant participant and a surviving witness to New York City history for nearly 200 years! Under the stipulations of the Landmarks Law, it qualifies on architectural, historical and cultural criteria for designation as a NYC individual landmark," said David Mulkins, chair/co-founder of the Bowery Alliance of Neighbors

The building was no stranger to controversy. For instance, in 2004, Cooper Union, the building’s previous owner, painted over a 9/11 tribute mural to make room for revenue-generating advertising.

"The building itself is a rare specimen that has remained standing since the transition of the Bowery from a residential area to one that was home to a variety of commercial venues in the early 19th century," said New York Assemblymember Deborah Glick. "While there have been some changes made to the façade of 35 Cooper Square, the building still retains its original twin peaked dormers, chimney, and gambrel roof, and is unmistakably representative of a bygone era in New York City history."

On Jan. 28, advocacy groups, historians, elected officials and East Village residents held a rally at 35 Cooper Square urging the city's Landmarks Preservation Commission (LPC) to designate the property a historic landmark. However, the LPC declined to take action, according to various published reports.

The current owner of 35 Cooper is the Arun Bhatia Development Organization, which has built dorms for the New School and seven condo towers, most recently 139 Wooster Street, and an unnamed partner. Arun Bhatia and its partner bought the land in an all-cash deal for $8.5 million last November. The combined lot size is approximately 4,833 square feet, in a C6-1 zone, with a total buildable of approximately 28,998 square feet.

35 Cooper Square is survived by several cousins on the Bowery. In lieu of flowers, loved ones are urged to help support the remaining historic properties that continue to face demolition throughout the city. 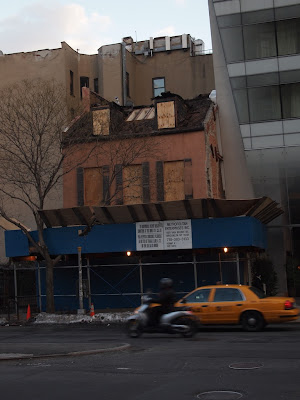 [Top images via Bowery Alliance of Neighbors]
Posted by Grieve at 7:00 AM

Great tribute piece EVG. I had no idea about the historical significance of this building. RIP--sad.

Another obituary. I may have yet to get a black suit after all. I fondly recall many nice meals in that place in the late 70s, very early 80s. The only place, to my knowledge, where one could order spaghetti carbonara with miso soup and sake. At that time, it was a Japanese-Italian restaurant called "Hisae's Place". Long wooden tables and benches, where strangers would sit next to each other and engage in meal-time conversation, its atmosphere very reminiscent of "Orchidia", the Ukrainian-Italian place on 9th street. It was owned by Hisae, the same Hisae who owned the Asian Pub and lived upstairs. So I'll raise a glass to you, Hisae. You had a great run.

Thanks for this. Last night I stopped to look long and hard at the building to say a silent goodbye. I know that sounds lame but whatever. A buildings department employee had just pulled up in his little white company car. I don't know why. He was looking over paper work. I didn't care to know why. I felt so sickened.

I won't go back to have another look at the building. Don't want to see it in any state of further demolition. I just want to remember it as it was. Hell, may even print some photos of it from its hey day & from when it had the great Twin Towers/flower painting on its side. It's all just so terrible.
-Roger P

This brought tears to my eyes. If the LPC (and I use the term extremely loosely) did not find this little jewel worthy of preservation, then I weep for the other buildings left that also do not fit into the parameters of the new, upscale, generic New York, in which all that is good and old is just so much chaff, to be swept aside for the benefit of the bland richies who just keep flooding in here.

My own Hisae's memory - in the 1980s, her Monday night "All You Can Eat Sushi" extravaganzas. My late husband and I often availed ourselves of it, and I would think of it every time I walked by the building.

So goodbye, 35. You graced our neighborhood for so long, and provided shelter for so many, but none of that matters any more. Nothing matters except the bottom line of greedy developers.

I'm sure that local community organizers smarter than me will let us know what is to be learned from this unfortunate event, but I hope that it includes some acknowledgement that petitions and rallies are so last century and at the least worthless '60s pursuits.

In this day and age if it's not lawsuits, injunctions and legislation, why are we wasting out time? If we don't get 21st century about this and fight fire with fire, it's just gonna keep on happening. Sorry, but I'm just totally bumbed out about this.

Great tribute and obit, EV Grieve, I dread to see what's going to end up here.

This is so maddening and disappointing. The LPC designates a stupid tree house a landmark, but not this?! Would Boston tear down Paul Revere's house? Never, and that's what I find so frustrating with this city and its total lack of historical self-value. The Statue of Liberty is sitting on some valuable real estate - let's relocate the statue to Storm King, build some luxury condos on Liberty Island and continue to sell tourists postcards of images of a city that used to mean something.

Its a big problem that the landmarks preservation laws aren't being followed by the city agencies (thanks Mayor!), which suggests to me that lawsuits be a (the only?) way to force compliance? Are there some organized efforts, beyond protest, to get the city to act appropriately?

One thing strikes me looking at these postcards: The Bowery was hoppin' back in the day! And, The Bowery we're mourning today is New York's own Skid Row, a totally different thing.

I'm not advocating knocking that building down, and I'm not convinced that building ugly luxury hotels is the best way to revitalize a blighted strip... it just seems like there's some disconnect between what we think we're losing and what we actually are.

@jayKayEss - this building pre-dates the Skid Row years of the Bowery, which is one of the reasons, it's so special. It's rare to find a building in the city that pre-dates the Civil War and the Bowery is home to more than one. It's amazing to think of everything this building has survived, only to be felled now by greed.

What a lovely obituary.
It's infuriating that the city isn't be able to protect a building with such a rich history.