'Nobody knows you until you’re dead'

More details continue to emerge about Grace Farrell, the 35-year-old homeless woman who a friend found dead under the scaffolding at St. Brigid's early Sunday morning. 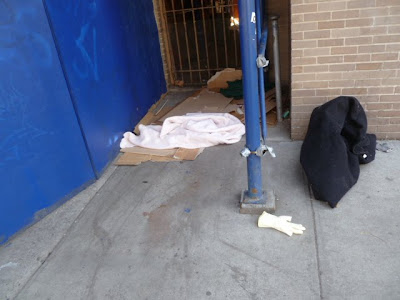 Bob Arihood first reported that a woman died of a drug overdose in Tompkins Square Park last Thursday. Her name was Danielle. According to the Times today, there's a connection between Danielle and Grace. English, a mutual friend of the women, told the Times that Grace helped give Danielle CPR while an ambulance was arriving.

Yesterday, the Daily News reported that results from Grace's autopsy had not been released.

As the Times noted, "if her death turns out to be from the cold, then she would be the first person to freeze to death on the city streets this winter, according to the office of the city’s chief medical examiner."

That's officially. Patrick Markee of the Coalition for the Homeless told the Times that, given how brutal this winter has been, "it’s hard to know exactly how many people might have died from hypothermia, or cold-related causes."

Meanwhile, as English said to the Times: "Nobody knows you until you’re dead. That's the God's honest truth."
Posted by Grieve at 7:07 AM

It's sad what happened to this woman but the real victim is the son she couldn't raise because she couldn't or didn't want to beat her addiction. Some of the other blogs glorify the addicts who hang out in Tompkins and treat them like rock stars by taking their photos and turning them into characters but they are real people who need help.

Grieve we should all be aware that some or most of what has been reported concerning these two events may not be fact.

I'm totally selfish and more worried about the upcoming elimination of rent control and how the effects me.

Today's Daily News has an article and photos of Grace, her son and former fiance:

Also, the PRINT edition of today's Daily News has a photo of Grace's son holding a painting of hers.