The Coen Brothers want to dress up East Ninth Street 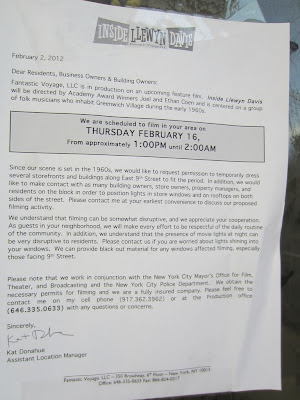 The Coen Brothers are ready to film the 1960s period piece "Inside Llewyn Davis," and they need your help. As you can see from the flyers that the crew posted yesterday, the production would like to request permission "to temporarily dress several storefronts and buildings" to fit the period here on East Ninth Street.

Per On Locations: "The movie follows a protagonist loosely based on singer Dave Van Ronk, a friend of Bob Dylan’s. Oscar Isaac stars as the title character while Justin Timberlake co-stars as another folk musician, his wife will be played by Carey Mulligan, and John Goodman will play a jazz musician who takes a road trip with Davis."

The crew will film on Feb. 16 from 1 p.m. to 2 a.m. Expect the color-coded Justin Timberlake sighting-level system to be on Red all that day and night.

This should be interesting..I wonder if the Coen Bros. have been reading the blogs about Vanishing and Grieving in the EV and I wonder if they will include some real window dressing--I await their creativity with E 9th Street--

love those guys--i'm happy to have them blocking our streets. just re-watched A Serious Man. such a good movie.

I don't want to be a party popper but what good do this bring to the neighborhood ?
They usually bring their own catering, block or slow down the traffic on sidewalks and in the bike lane, leave their trucks and/or generators idling all night long, use heavy machinery to lift HMI for night shoots, basically make our life more difficult and leave us with no choice, we already had the demolition of 51 Astor and soon the construction of a new tower with noise, dust..etc Why do we put up with all this ? I don't know...