On the Bowery, a synagogue opening above 7-Eleven 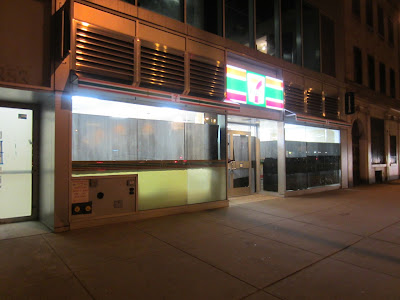 Over on the Bowery, in the space above the 7-Eleven and below the 52E4 pool, "a former Deadhead couple" will open a synagogue, the Post reports today in an article titled "Hasid shul of rock."

As the paper notes, this address is near the former CBGB space.

“The Bowery used to be a place you wouldn’t walk around at night,” Sarah Korn said. “But now it’s safe, it’s hip, and it needs a shul.”

Rabbi Korn said Jewish East Villagers and NYU students alike will be welcome to their Chabad Serving NYU synagogue — who have been running this since 2002 — when the space opens later this winter.

Curbed noted this opening in January 2011:
A Rabbi and John Legend Walk Into a Bowery Condo Building...
Posted by Grieve at 7:02 AM

Email ThisBlogThis!Share to TwitterShare to FacebookShare to Pinterest
Labels: 353 Bowery, the Bowery

Hands down better than another chain store.

Good, this means that establishments within 500 feet of the synagogue can only apply for a beer and wine liquor license. On the downside, landlords will opt for a bank, high-end boutiques, or chain stores to be their tenants. can't.win.

Why does this story make me think we're heading ever closer to the Escape from New York environment?

Great news for the East Village and NYU community. The Rabbi is amazing individual who is sure to bring much success to the area. Good luck!

Great, another branch of the homophobic ultra-orthodox sect taking over like born again Christians. "But they like the Dead! They must be cool!"

im pretty sure those frankfurters they're serving up downstairs aint kosher.