What is happening with the Bowery Poetry Club? 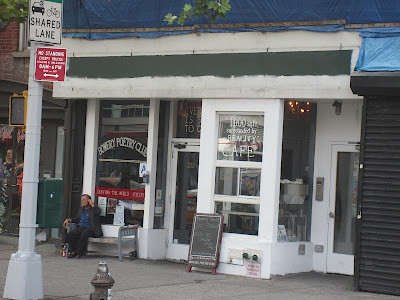 [Monday outside the Bowery Poetry Club, where the sign has been removed]

We've heard a lot of speculation in recent weeks about the future of the Bowery Poetry Club. All sorts of rumors have been flying around, from an imminent closure to a months-long renovation.

Given the speculation, we decided to address a few of the rumors here.

In early May, the Club that Bob Holman founded in 2002 launched a crowdfunding campaign to raise $50,000 for "a special dining experience that would include a bar, cafe/restaurant and a remodeled performance space," as BoweryBoogie noted.

However, three days later, someone cancelled the campaign. 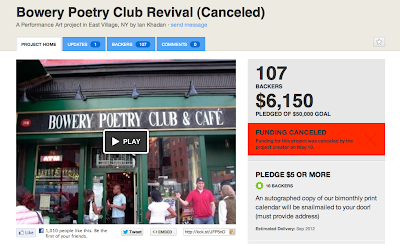 We've heard that several promoters have taken their shows to other locations over issues with the Club. Meanwhile, there is little, if anything scheduled at the Club toward the latter stages of the summer. One producer with a monthly gig there has scheduled his show at another location for end of July.

One insider told EVG contributor Stacie Joy, "Bob told me there might be some be some changes, which is why there's little on the calendar for August. I'm hoping it's nothing major and trying not to worry."

According to another inside source: "Bob is insistent that this is a change and not the end. The plan is to close for renovations beginning in August. Of course it will have a different feel when they re-open but who knows? It might be even better than it is. At this time, no deal has been finalized, thus little information has been released."

We asked Holman for his take on the Club's future.

"Well, I'd hoped to be able to put rumors to rest by now — but really, there's no news till this New Idea becomes real! (or not!)," he said via email, adding, "Don't mean to be mysterious."

I wish I could say this is surprising. It's a great venue that adds so much to the neighborhood, but Bob is a difficult man to work with.

I hope they don't close, but one thing has always mystified me about this place, they refuse to sell tickets in advance for shows.

Bowery Poetry Club is not for the faint of heart - PLEASE KEEP IT THAT WAY.

Around the BPC, it is pretty well known at this point that BPC is 1st closing for months of renovation. (i.e. transformed into an upscale supper club and stripped of it's salt-of-the-earth art aesthetic and events.)
After, it is being leased by said fancy supper/cabaret club Duane Park. Many Bowery performers do indeed perform there, but their dinner/show night is $75 and their show content is mostly cabaret jazz and upscale burlesque.
Apparently Bob will be booking the club on Sundays on Mondays only? So perhaps a few poetry events of choosing will remain at the BPC....
I will miss the BPC terribly.