Why yes — you can rent an apartment on East Fifth Street between A and B for $13,000 a month 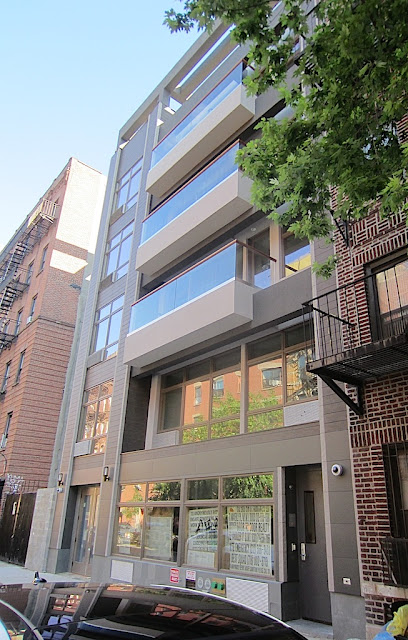 The last time that we checked in on 532 E. Fifth St. between Avenue A and Avenue B, the new, eco-friendly building had two-bedroom apartments for upwards of $5,600. We paid a return visit to Streeteasy and found one listing for — $13,000. (And no fee — ha!) 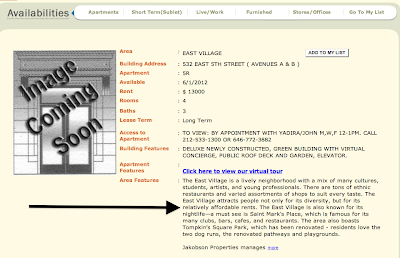 The listing for a $13,000-a-month apartment hilariously mentions that "The East Village attracts people not only for its diversity, but for its relatively affordable rents."

The market price has been set on this block. Your move, Ben.

On the way: A five-story apartment building for Fifth Street
Posted by Grieve at 6:48 AM

WTF??? I cannot even imagine what piece of douche that will attract. I'm frankly horrified of many newcomers who can afford today's rents. I don't begrudge them their money; it's just what they do with it and how they act. The apartment above me was just vacated and I'm getting a new neighbor very soon. I wonder if I'll get to sleep again or will have to deal with beer pong and fratty noise at all hours of day and night.

Rent is too damn high!

Yeah, that "diversity" you're helping to quickly get rid of by paying that kind of rent! WTF!

I have had the honor of living next to this 5 year construction job on 5th between A/B. It has cost me countless hours of sleep, building vibrations, contractor heckling, and mouse infestation. I myself must have called in 15 complaints to 311 for violations, so I guess I can see why they are having to charge so much now that they are FINALLY finishing it. I'm gonna love thinking about my $2000/month 2 bedroom place every time I walk by.

yeah but at least there's no broker fee!

When the Marc Jacobs opens up next door we can officially run screaming down 5th st. In the direction of the river.

My family lived on that street for 55 years. I could never have seen something like this coming.