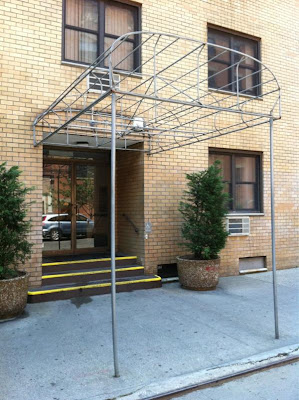 As we first reported back in March, the Cabrini Center for Nursing and Rehabilitation, which provides health care for low-income elderly residents in the East Village, will close this summer.

In November, we noted that developer Ben Shaoul was the mystery buyer of Cabrini on Avenue B at East Fifth Street. Depending on the source, the space here will be converted to rentals or condos...

We never heard an exact closing date for the Center, which opened in 1993. Cabrini officials said in the spring that the closure process would last several months — likely until July.

The photo above by EVG reader @zmack shows that workers have removed Cabrini's awning. We've reached out to Patricia Krasnausky, president and CEO of Cabrini Eldercare, for more details on the closing.

Q-and-A with Patricia Krasnausky, president and CEO of Cabrini Eldercare
Posted by Grieve at 2:04 PM

As you recently had a reader asking about good landlords, I hope the future renters/buyers of these units read up on the despicable history of this building and boycott it.

I was hoping and expecting this would show up on your blog. I'm a former worker there and someone who still works there sent me a picture of it a couple of days ago. I found it sad and annoying that they couldn't even wait until all the patients were gone, let alone the employees.