And we're off: 1st Citi Bikes spotted in the wild; world doesn't end

Anyone with a Citi Bike membership want to share an assessment of your experience with the bikes today? (Anonymous or not.) Via the EV Grieve email ... or in the comments...

Meanwhile, the Post reports today that a Citi Bikes docking station was positioned "a mere 150 feet" from Frank's Bike Shop on Grand Street.

And the shop’s 68-year-old owner, affectionately known as “Dr. Frank,” is worried about his future.

"My biggest question is how did they come about to choose the areas where they put these bikes. Did they study the areas? Did they look at the businesses around them?" asked a flabbergasted Frank Arroyo.

He says his bike rentals comprise one-third of his income.

And did you see Marcellus Hall's New Yorker cover this week? (Read about it here.) 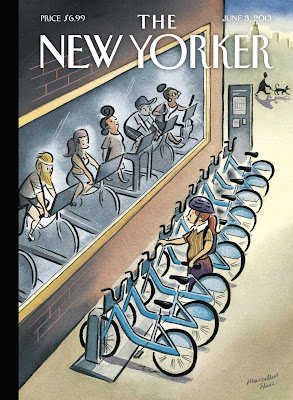 That NYPost article was poorly written and factually incorrect. Says the bike shop owner gets $30 a day for rental, and the CitiBike is $10, but that is not true. The $10 is the charge for unlimited 1 day 30 minute rides, but if you keep the bike out for longer, the charge skyrockets. Not a competitor to the local bike rental shop at all....

There's a smaller version of that truck running around. Saw it yesterday over by the Loisida Festival.

On a related note, what's with the zillion Verizon FIOS trucks running around, including a small three-wheeled-jobbie I always see cruising up and down Ave C?

rode it. rode it to the hardware store. rides real nice. it was fun. and i'm a self respecting new yorker who knows how to pronounce Houston St. and everything.

Well, the thing will go live any moment, but it's not too early to declare the program an unmitigated failure. In fact, it's a disaster of a magnitude that can scarcely be appreciated, even by those of us living through it. I mean that very, very literally.

If a disaster of this magnitude is beyond your ability to appreciate, I envy your life. I can think of worse ones. I can even appreciate the magnitude of some of them.

We'll just have to see how it goes. They're a very specific use case - very different from all-day bike rentals and not even in the same ballpark as bike ownership or repair. I might be wrong, and he's surely right to worry, but I'm cautiously optimistic about Frank's prospects in all this. It could even end up to be a good thing at least for him; I would argue that it IS too early to know for sure.

But seriously, CitiBank sucks and there's no disputing that.

I rode mine to and from a job today. It was fantastic.

Sorry you have to shill, I mean work, on a holiday.

I rode about 10 bikes today, from E.Vil to DT Brooklyn, to Bed-Stuy, to Williamsburg and back to E.Vil

They take a little getting used to. They're definitely not a performance machine and you would choose your own bike in any situation where you could.

That said, they work well and I'm sure I'll use them frequently whenever I'm doing poin to point trips, especially ones not starting from home.

I don't understand the blanket statement that "Citibike Sucks." It worked well for me. I took out 5 different bikes. One had a bell that was a little wonky, but that was the worst of it. And guess what, there are 10 other bikes to choose from.

We wore helmets, obeyed the laws, rode with traffic, used our hand signals, and guess what? We're still alive and had a very enjoyable day getting further around town than we normally would in just a few hours. Much more pleasurable than the subway, and damn faster than walking, even at a cautious speed. Even cab drivers were asking us what we thought.

All around it was a good experience.

I'm going to start pronouncing it "Hew-stun" just to fuck with people. Lied here since birth, 43 years, in case that matters to you.

@anon3:57: I don't like to tell people how to run their lives, but you should probably considering either telling the truth or proofreading your comments.

Yeah, I'm sure all these glowing comments with female first names aren't fake at all. Nope. Nothing but the truth here.

@Melissa: You may have survived but what about all the people that didn't? None of them will be commenting here. There are rivers of blood running in the streets, I swear.

On a slightly related note, there's a sign outside DBA: "The drive-through is closed."

Females can't comment on EV Grieve? If I were completely anonymous that'd be better.

Rode my personal bike around tonight, beautiful weather btw. Anyway, I saw a number of people riding around on them. It's the same bike as Capital Bike share in DC and DecoBike in Miami. They are good enough for getting around. I actually have a membership but i'll just wait until I don't have my own bike with me later this week.

Nice job with the hand signals, Melissa. You are for sure the only bicyclist in Manhattan using them. I was nearly killed by a bicyclist hauling ass through a red light- going the wrong direction- yesterday afternoon.

I'm Confused On HowThis Works? So i Get a sumons for Riding My Personal Bicycle In The Bike Lane With No Helmet, But People Who Rent Bloomberg's Bikes, Helmets Are Not Required, Only Encouraged Because It Would Discourage People From Renting? so the law Doesn't Apply To People Who Line Bloomberg's pockets? What's Next? Rent a Small Electric Car From The City And No License or Seat Belt Required?

Melissa, Guess What? You're one in a billion. I'm glad you obeyed traffic laws and loved your Citi Bike experiences but Guess What? The program is a corporate, greedy blight on our city and I feel bad that you've been 'taken for a ride' as it were.

With all the biking you do, why not just invest in your own sweet ride and be gloriously independent of the company's fares? Unless you're commenting here as one of their marketing agents and my words mean nothing (and yes, my 'Guess Whats' were mocking the way you write. Sorry about that but I'm no angel).

Anonymous 5:02AM, you sure do know a lot about other cities' bike share programs. Your comment is highly suspect, especially considering you have a bike but are opting to rent Citi Bikes when you don't have your personal one with you?

NYC has no helmet law for bicyclists. Thus no inconsistency. Also no need to Cap The Fist Letter Of Every Word. It's annoying.

Took one out yesterday from EV down East River Promenade and back. I enjoyed it. I might take it to work this week.

I didn't know this blog catered to men only. Hilarious. Anyway, a warning to citibike users. When I was docking my bike yesterday at 9 and C, I noticed that the one beside me wasn't docked properly so I locked it up for them. They can be a bit tricky so please make sure you dock them properly and wait for the green light, otherwise you're looking at a $1000 charge on your credit card when someone takes it. I'm sure this person has a hefty bill coming depending on how long it was undocked.

NYC Law States All Words Shall Start With A Cap

Love this program. Options are wonderful. Hopefully we will feel some relief on our subways in buses over time.

This Is Just Another Way For The Bloomberg Administration To Disarm Americans. Renting These Bikes Will Leave You Defenseless, And Stripped Of Your Rights. The Constitution Will No Longer Apply To You While You Sit On One Of Those Bikes. You Are Also Taking Jobs Away From The Pedal Cab Operators, And The Chinese Men With The Rickshaws. And Their Children Will Starve. So Go Ahead And Rent That Communist Bike........

I was so disappointed to wake up this morning and realize that the Citi Bikeshare dock located at Grand Street and Henry, by the East River Coops, was taken away. Why did that happen? People seemed to be using the bikes, riding into the East River Park and all over the neighorhood. Placing a bike dock there was a perfect way to brighten up that drab triangle of asphalt. Moreover, it would surely bring people into our neck of the City, increasing business for all the businesses on Grand Street down here, including the fantastic bike shop named Franks. My hypothesis is that more bike-friendly people would actually see Franks, and would bring more business in over time. And a little bit of marketing would likely expand his bike rental service! But it appears that we will not have the opportunity to test my claim.