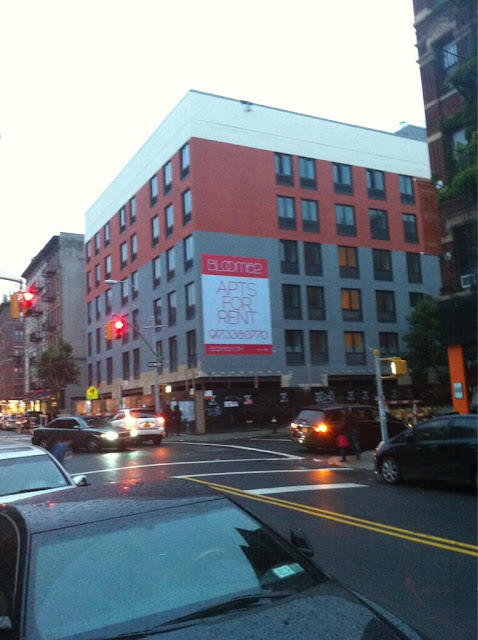 So, if you were to turn a former nursing home into a luxury apartment building... how would you market that new space? A lot of people have been asking that question since developer Ben Shaoul purchased the building that housed the Cabrini Center for Nursing and Rehabilitation on East Fifth Street and Avenue B.

Please meet Bloom 62 — "The right place to plant your roots."

A banner ad went up yesterday on the East Fifth Street side of the building. And there's now a website with a few details and renderings about the rentals. 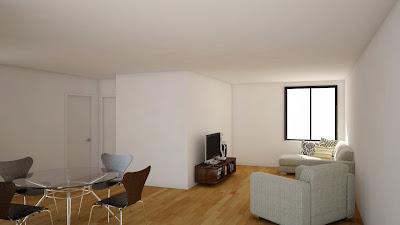 And here we are:

It sounds impossible: a fully-appointed luxury building has sprouted in the beating heart of the East Village. A 24-hour doorman greets you before work in the morning, after returning from a cafe in the evening and when heading out to Tompkins Square Park on the weekends. You'll have every modern convenience, from a gym to a roof deck to in-unit laundry, on the same streets where names like The Ramones, Warhol and Hendrix and [sic] paved the history of this neighborhood for years to come.

Not sure why this sounds impossible. After all, Ben himself created a fully-appointed luxury building not too long ago with the A-Building on East 13th Street. (Maybe Hendrix didn't pave 13th Street with history?)

There's no pricing for the apartments just yet.

The nonprofit, 240-bed Cabrini Center for Nursing and Rehabilitation — sponsored by the Missionary Sisters of the Sacred Heart of Jesus — provided health care for low-income elderly residents in the East Village. The center opened in 1993 and served 240 patients and employed nearly 300 employees. The facility closed last June.

Q-and-A with Patricia Krasnausky, president and CEO of Cabrini Eldercare
Posted by Grieve at 8:00 AM

Email ThisBlogThis!Share to TwitterShare to FacebookShare to Pinterest
Labels: Bloom 62, Cabrini Center for Nursing and Rehabilitation

They should call this building ChocVanStraw62.

It sounds impossible ... A 24-hour doorman greets you before work in the morning, after returning from a cafe in the evening and when heading out to Tompkins Square Park on the weekends.

What's impossible is to have this singular doorman there to greet you at 8 a.m., then greet you again when you stumble in drunk at 9-10 p.m., and have him *still* be there two days later when you drag little Tennessee and Chutney to the park. There's no such thing as a 24-hour doorman unless he is a robot.

I don't know what Ramones and those other things are. How close is 13th Step?

...and when you grow old, you will wear your trousers rolled...and hope you can afford 24-hr. nursing care in your luxury condo.

I know someone who died in there. I could never live there. They look like prison cells with windows and rooms brightened with Photoshop.

Lot's of people died there including one of my uncles. I hope their ghosts haunt anyone who is foolish enough to live there.

Wow! This new development is So ugly! both inside and outside, could it be more mediocre if it tried?

What was done to this building makes me sick every time I look at it, and the ugly color scheme ain't helping. Especially as contrasted with those goddamn blue bicycles that are everywhere.

I'm picturing an Old West-style wanted poster, with Shaoul's and Hoyda's faces on it.

Sorry but that interior doesn't say luxury at all. It says "wait here please, the dentist will see you in a minute." Except without the magazines.

Funny, I lived on that block when Cabrini was built....what a dump. I bet the walls are like paper.
Do people looking at apartments like these even know who the Ramones are ?
And are Hendrix and Warhol quintessential East Village celebs ? I missed that chapter....

A luxury building "sprouting" into a "beating heart" sounds more like a medical condition. Sorry EV, don't know how much longer you got...

Is that a bar on the roof? Can that be legal?

"paved the history of this neighborhood for years to come." - the history which is being quickly erased, which you are helping to erase by moving into this genetic luxury monstrosity