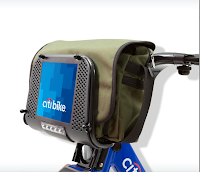 As the apocalypse© The Apocalypse® approaches with the arrival of Citi Bikes on Monday, there isn't any shortage of pros and cons to read out there about the bike-share program ... (This Curbed post from yesterday links to many of the various articles on the topic.)

Meanwhile, in an interview with DNAinfo's Serena Solomon, Amber Cafaro, a traffic safety sergeant stationed at the 9th Precinct, echoes what some people against the bike share have said: there will be an increase in accidents.

Cafaro listed recent accidents in the East Village involving distracted cyclists talking on phones and running red lights, along with one biker who slipped on a wet roadway and wound up putting his hand through a car windshield.

The East Village recently saw a spike in reported bicycle crashes, with eight in the 28-day period ending May 19, compared to just four in the same period the previous year, Cafaro said.

Meanwhile, at Slate, there's a "10-point resolution to end the decades-long conflict between walkers and bikers."

[Image via Citi Bikes]
Posted by Grieve at 6:05 AM

You do have to put your full facilities into riding the bike (and not using a phone handset while riding), and you do have to stop for red lights and yield to pedestrians.

It's a fiction that you have to stay in the bike lane at all times. NYC law specifically eliminates that requirement from state law, and since bikes are considered vehicle traffic, you have the full use of the road. You're supposed to stay off to the side if you can, but if there are obstructions (cops are really bad at pursuing the multiple non-cycling malefactors putting the bike lanes to their own use) then you should feel free to switch lanes (as safety allows) and proceed. Also, cyclists who ride faster than 15mph (you won't see this happen on a Citibike) may have a good reason to use normal traffic lanes; the protected lanes on avenues are treacherous with suddenly-appearing pedestrians who are often not paying attention and do not respond to very loud audible cues. Fast cyclists are going fast enough that automobiles have little to complain about in regards to sharing the road.

Maybe this doesn't make sense to some people, but this is how it is deliberately written in the law.

Isn't it fun when police officers have no idea what the law says?

I'm all for bike safety.

It would be really nice if the cops did something about people speeding in our neighborhood. It seems to have gotten worse lately.

Traffic fatalities go way, way up as speeds increase above 35 mph. That's why speed limits are what they are. I see people going 45-50 all the time. Reckless and dangerous.

—34 RCNY 4-12(p)(1) states that bicyclists should ride in usable bike lanes, unless they are preparing to turn, or are avoiding unsafe conditions (including but not limited to, fixed or moving objects, motor vehicles, bicycles, pedestrians, pushcarts, animals, surface hazards).

Q: Isn't this an overstatement of the law? It seems to me that the law says that bikes have to stay in bike lanes.
A: No. If you look at the full text of the statute it clearly grants cyclists the discretion to ride in the bike lane or not, according to whether the cyclist deems it safe. As safe, usable bike lanes are extremely rare in New York City, cyclists are not required to endanger themselves by riding in unsafe bike lanes.

The text on the DOT page is a useful oversimplifaction of the way the law is written, but road users who have good reason to use a part of the road other than a provided bike lane are allowed to do so.

Judges agree with this interpretation if you dispute a ticket written for such a violation.

The larger concern is one of legal confusion: if bicycles are to be treated by law as something that have vastly different obligations and privileges from motor vehicles, how can that coexist with the parts of the law that say bicycles are to be treated exactly the same as vehicles? And is it orderly or fair that the police are almost non-attentive to vehicles that park or drive in bike lanes? This was an issue last year, when police were caught using their cruisers to obstruct bike lanes but then gave (improper) tickets to cyclists who circumvented them! Things like that are a reason why I would prefer to consult a city lawyer or private attorney for legal guidance rather than randomly picked traffic enforcers.

Every cop could sit at every intersection and write continuous tickets if they wanted to. They need to crack down on cabbies, they just stop in the middle of the lane without signaling, it amazes me there aren't more accidents due to cabbies, they disregard every law. Next they need to crack down on the delivery people because I'm about to start walking around with a baseball bat to take out the next one who drives into me. I'm sick of it.

This doesn't usually happen, but I think the Grieve may have goofed."apocalypse©" should probably read "apocalypse®." Furthermore, Grieve should specify whether the lower-case of the first letter is part of the mark he is claiming and, if so, what we should do if it's the first word of the sentence.

Trying to decide how to respond:

2) I blame the [pretend] interns

3) You need to speak with the legal department

It's #3. Always direct inquiries to Legal.

You don't have to ride in the bike lane!

Scoff at Slate and their ten-point resolution. They are actually advocating you printing out these "contracts" and whipping them out next time a biker and a pedo butt heads. What a douchy way to go through life. As someone who rides a bike I found out that what I needed was a change in perspective. I look at pedos the same as pigeons. When I come across pigeons in the bike lane, I don't curse them, I don't say "FUCK YOU", I don't get mad. I just swerve and go around them, because they are stupid, they are wild animals, they don't know any better. I started viewing pedestrians in the bike lane the same way and you know what, I don't get mad anymore, it was as easy as that.

I was pulled over by a cop and got a summons on May 10th for riding outside the bike lane on 1st Avenue between 11th and 12th. I was in the bus lane, and didn't run any red lights or block any bus. I mailed in my plea of "not guilty" a few days ago.

The bus lane is inherently a safer place to ride on 1st, because most cars are turning left from the avenue, not right.

@ Anon 11:16- Yup- Fuck it. I'll just go around. I'm not working. I'm not getting paid. I'n not in a hurry. Sometimes I'll just stop & wait a light or two for whatever idiot is in the way to fuck off & get far away enough from me. You gotta watch out for those "suicide jumpers" though. & last minute turn signal dicks.

My friend just screamed at a cyclist who was riding his bike and texting this morning. Insane. Everyone--people driving cars, people riding bikes and pedestrians--aren't looking where they're going these days. They're looking at their smartphones.

Great Idea. Add more Idiot 'Nouveau' Bicyclists to the worthless Experienced ones running rampant on our street (and SIDEWALKS). This is an idea run amock by a mayor and DOT Commissioner who have run Amok.
License the Bike Cretins before we (the Pedestrians of this city) take matters into our own hands.

Been riding a bike to commute in the city for years. Before the bike lanes, you'd never see people riding a bike while texting / talking on the phone / being distracted. You had to pay attenntion or you'd get hit by a car. Bike lanes, while a nice idea, lulled some folks into a false sense of security and those folks now endanger the rest of us by riding around carelessly. I imagine the citibikes will be used by these folks (seeing as the rest of us actually own bikes), so, yes, I agree that there'll be a rise in accidents. With time, though, things should even out. Such is life.

It may be your prerogative to risk certain death by riding helmetless among the tonnage of automobiles infesting City Streets, however, to enable such reckless behavior from anyone with a debit card is patently immoral. Children will be riding these things and people will die.

bicyclist deaths and serious bodily injury are common in New York, albeit unpublicized, and they are certain to rise with this money grubbing, reckless decision by the City.