Countdown to Citi Bikes bike share in the East Village 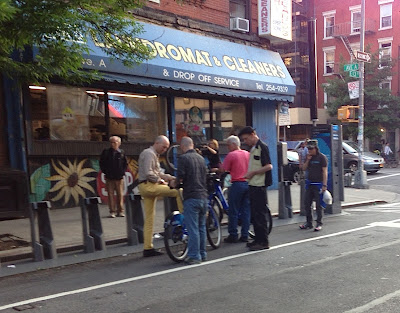 The Citi Bikes bike share program will officially launch on Monday for the 8,000 or so people who bought the annual membership in the City. (We saw on Twitter that at least one East Village resident received her membership card in the mail.) For everyone else, weekly and daily passes go on sale June 2.

Ahead of this, Citi Bike officials were checking out the docking stations to make sure each rack works here on East 13th Street and Avenue A, as EVG reader Gary pointed out... 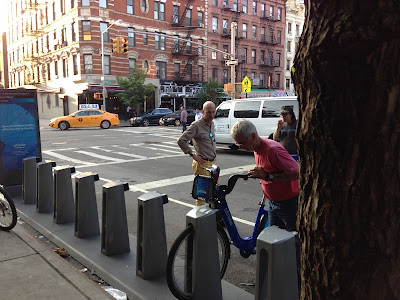 This was the docking station that someone festooned with dog poop and colorful signs last week. In fact, this post (briefly) served as the backdrop for Greg Mocker's report on Citi Bikes Sunday night on WPIX ... 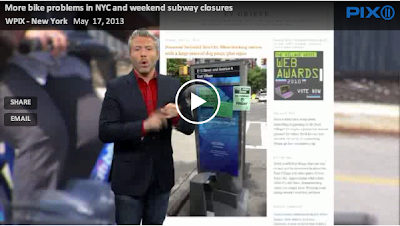 Here's the segment. (Thanks to Shawn Chittle for this.)

Meanwhile ... several readers noted that someone placed MasterCard stickers on the docking stations on East Second Street at Avenue B... and East Sixth Street at Avenue B... Seventh Street and Avenue A... initially we thought this might be some act of tomfoolery, though that's not the case... The program is funded jointly by Citibank and Mastercard, who paid $41 million and $6.5 million, respectively, according to Bloomberg BusinessWeek. 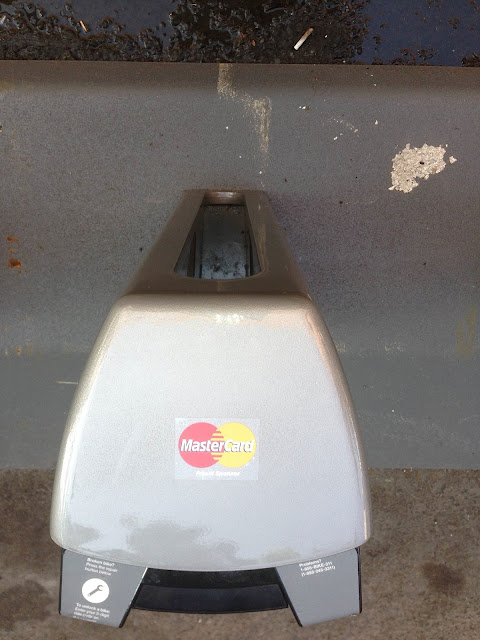 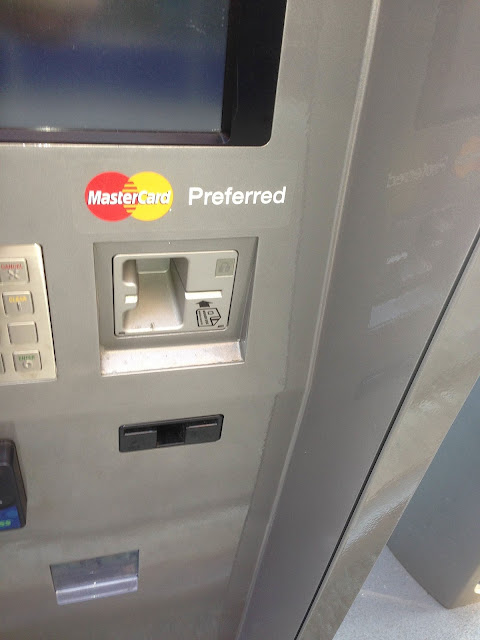 Finally, as a refresher. For accurate (probably) information on how Citi Bikes work... here is the official information on pricing ... and here are FAQs.
Posted by Grieve at 6:05 AM

I'm not so sure the MasterCard stickers are tomfoolery. I got my "key" in the mail yesterday and there's a MasterCard logo on the back. Unless, of course, the tomfoolerer had access to my mail…

Thanks Creature! I changed up the post a bit... this was presented to me as some hijinks because it wasn't Citi-branded.

This is service is only for a select group of people. It is not available to all the citizens. It is privatization of public space..

The station at MacDougal Street b/w West 8th and Waverly disappeared overnight. It appears the DOT will be relocating to the other side of the street sometime today (where it is not blocking a building entrance).

Good to know we've paid for the installation twice.

@nygrump - There's no one transporation system that everybody can use. That's why we need a mixture systems. Most of the docks sit in space that was used as parking for private cars, but only 20% of Manhattanites even own cars. Doesn't that count as privitazation of public space?

@Zach - You're not paying for anything, unless you use bikeshare yourself, or you own Citibank stock. And they should get credit, rather than blame, for realizing that they're not likely to get a big, complicated system exactly perfect on the first try, and for making it easy to move things around to fix the inevitable mistakes.

Good...I'm happy to hear that Citibank is reimbursing the DOT every time they have to come in and remove and later reinstall these stations. And repaint the road and move those stanchions.

Someone keeps defacing the docking station on 13th street between A and B with signs asking people to call 311 to complain. No reason is given - must have lost his/her parking spot or have some irrational hatred of corporations or bicycles.

In any event, the signs reminded me to send a thank you note to nyc.gov/311 for installing the docking station on 13th.

I would think the funding from Citibank and MasterCard account for having to move the docking station. I don't know if you've ever made a budget, but normally, they plan for contingencies likes that.

I think DOT made it clear that no taxpayer money will be going into this for five years. I suppose in a year, we'll see if that's true when the books are released to the public.

I got my key. I'm ecstatic that I'll now be able to use bikeshare as an alternative to crowded buses and slow L trains. I don't bank at Citi and have never owned a MasterCard, nor will the branding sway me to do either.

This is going to be a nightmare.

Shootings, Untended Poverty those are Nightmares. Cutting down the carbon in the air and reducing asthma and all the other illnesses caused by our high levels of air toxins- just by peddling a little ....thats poetry.

I think these shiny new bicycles are wonderful...

At first I thought these bikes were a bad idea and useless because of the 30 minute time limit. But I have changed my mind. The yearly membership is worthwhile because you get 45 minutes. It's perfect for running errands and being able to ditch the bike when you get to your destination. The discount for people in public housing or the Lower East Side People's Credit Union got me to join. I'm looking forward to trying this out.

are we suppose to be impressed that they sold 8000 memberships in a city of 10 million with one of the biggest media/ad push that has been going on for a couple years now? lmao 8000 targets riding around for the taxis or missles coming at you if your on foot..btw who else finds it funny that Citibank was bailed out by the governemnt for 300 billion and a stake it in and is now giving away $41 million in an experimental transit option for yuppies and tourist! wtf is going on.

What if there isn't a bike rack at your destination? What do you do with the bike?

What kind of hellish dystopian world are we living in where the application of a MasterCard logo could be misconstrued as "tomfoolery".