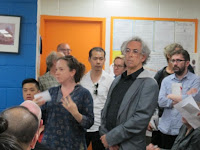 Catching up with Monday night's CB3/SLA committee meeting. One item of particular interest: The Living Room's proposal to take over the soon-to-be-former Klean & Kleaner laundromat on East Second Street. (Read the background on this here.)

Living Room co-founders Jennifer Gilson and Steve Rosenthal (pictured) were on-hand to make their case, though, ultimately, to no avail. The committee voted down the applicants. Let's have BoweryBoogie pick up the action:

As it stands, this stretch of Second Street was grandfathered into a general residence district, and doesn’t allow for any performances with cover charges. There was reportedly contact with the DOB to settle this issue, but the Living Room hadn’t heard any news as of last night. And they didn’t have the luxury of laying over the application another month due to landlord/lease constraints, so a vote had to transpire.

BoweryBoogie also has news of what went down with the Soho House vote on Ludlow Street. (Spoiler: Denied, though it likely won't matter in the end.) Head on over to BB's for more details on the three-hour drama.

Eater has more on Monday night's meeting here. The Lo-Down has coverage here.

[Photo via BoweryBoogie]
Posted by Grieve at 5:45 AM

Bummer. I was hoping to have a hip new club on the street. Plus. the idiots who live next door to the proposed space are the worse, always blasting music really loud. Was hoping they would get a taste of their own medicine.