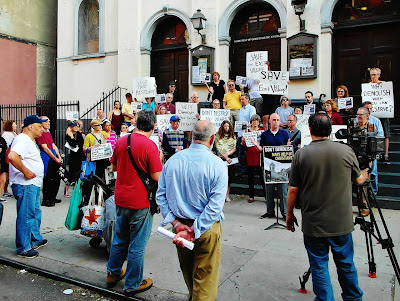 The lot that includes Mary Help of Christians Catholic Church on East 12th Street is slated for demolition to make way for a new residential complex.

However, East Village community and preservation groups are hoping that the historic church that Douglas Steiner plans to develop can be spared. Members of the groups noted this last evening during a rally on the steps of Mary Help of Christians.

Meanwhile, there's a new development that could possibly put a hold on the production: dead bodies. According to a news release distributed after last evening's event:

The church was formerly the site of the cemetery of Old St. Patrick’s Cathedral, where thousands of people were buried starting in the early 19th century. This was only the third and at the time the largest Catholic Cemetery in New York. While the graveyard was moved to Calvary Cemetery in Queens in 1909, it is not known if all remains were removed and cleared from the site or if some still lie in burial underneath.

The preservation organizations have written to developer Douglas Steiner and the city’s Department of Buildings and Landmarks Preservation Commission to notify them that a very large cemetery was formerly found on this site, and calling for a complete archaeological evaluation of the site as required by law in such cases before any work proceeds, to prevent disturbance of any burial site or human remains which may remain here. 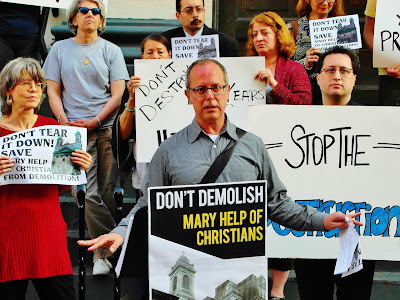 Those gathered called upon Steiner to build upon the adjacent church yard, which lies outside of the boundaries of the former 11th Street cemetery, rather than upon the site of the church, school and rectory.

The Greenwich Village Society for Historic Preservation, the Lower East Side Preservation Initiative, the Historic Districts Council and the East Village Community Coalition were all represented during the rally.

"Mary Help of Christians is certainly one of the most historic buildings in one of the most historic neighborhoods in our city and country," Lower East Side Preservation Initiative president Richard Moses said in prepared comments distributed to the press. "Starting in the early 20th century it played a central role in Italian-American history, and the building still commands a very imposing architectural presence in the neighborhood."

Early last year, preservationists submitted a request to the Landmarks Preservation Commission asking them to landmark the church. The LPC denied the request. (Read about that here.)

Specs for the retail portion of the complex mention a "140 unit market luxury rental building" for the space.

"It would be a tragic waste and shame if these beautiful buildings, so full of New York's history, were demolished for expediency’s sake," said Greenwich Village Society for Historic Preservation Executive Director Andrew Berman. 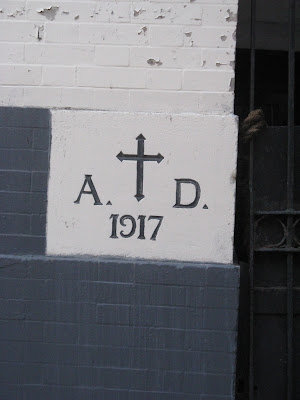 Previously on EV Grieve:
Permits filed to demolish Mary Help of Christians church, school and rectory
Posted by Grieve at 6:20 AM

Email ThisBlogThis!Share to TwitterShare to FacebookShare to Pinterest
Labels: Mary Help of Christians Catholic Church, tales from the crypt

Wow. I had no idea that this church was once the site of a cemetery. Another amazing piece of East Village history.

I have seen maps of this area from the 1800's and yes a very large cemetery was on this block however I don't think it extend as far east as the land on which the church now stands. I believe part of the public school and the play ground is the area in question. However if this tactic works to save this church I hope they succeed and at the very least make this a long drawn out process for the developer.

It's sad that this church will go but maybe if some of the people protesting to keep it here went to the church when it was open, the Catholic Church would have thought twice about closing it.

All in all, it's sad to see such beautiful architecture go to waste.

The Catholic Church would not have thought twice they needed money to pay off the rape victims. That everyone is trying to keep quiet and make us forget that the church at the highest levels protected the child rapists.

In the years since Mary Help of Christians closed, I've watched a dedicated (if small) group of parishioners continue to meet on the steps for various feast days. It was heartbreaking. Perhaps the congregation was too small for the terribly cash-strapped Vatican to continue to support, but their devotion was/is impressive.

Anyone who either went to school at MHC or was a Parishioner of the church knew what community and family felt like. MHC was like a second home. The idea that the church may have been kept open if the protesters pictured here would have come to Mass, not only negates the fact that they are showing support for our church, but also misrepresents the welcoming Christian spirit that MHC taught. We should be thankful and grateful that people care enough to volunteer their time and show support. I pray that their their efforts yield positive results for MHC and regret that I was not able to join them on those steps.