Is this wall a remnant of the former cemetery under Mary Help of Christians? 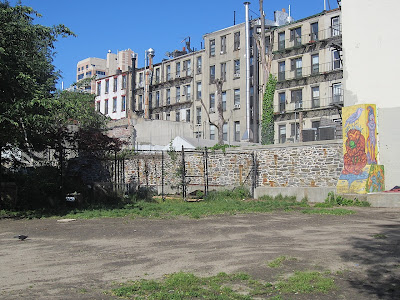 Last week, local preservationists called for a complete archaeological evaluation of the grounds below Mary Help of Christians Church on East 12th Street. The site was once home to a cemetery, and the groups are concerned that some burial plots may remain.

Developer Douglas Steiner has plans to convert the property into a residential complex.

After the rally, Greenwich Village Society for Historic Preservation Executive Director Andrew Berman made a discovery... he recently wrote about it on GVSHP's Off the Grid blog:

[R]eturning to our East 11th Street offices after yesterday’s rally, we saw something on the block we had seen many times before, but now, armed with the knowledge of the former cemetery’s existence, viewed in an entirely new light.

On the western side of the block, running between what is now called Open Road Park and the rear walls of the properties which line the 1st Avenue end of the block, is a mysteriously out-of-place stone wall. And this wall just may be the western wall of the long-vanished cemetery. 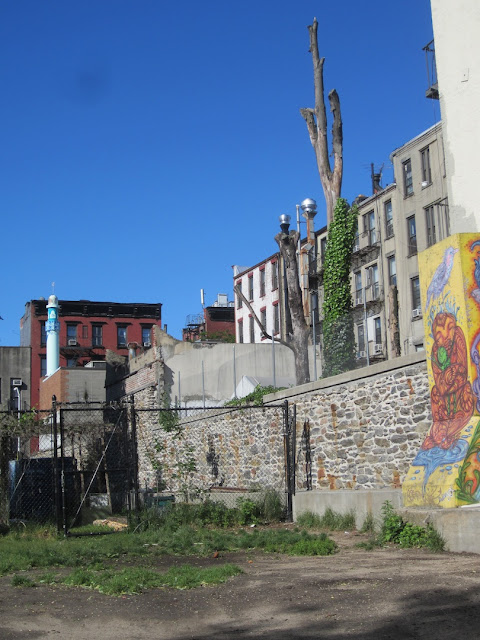 Berman makes his case with some archival maps of the street, like this one from 1867... 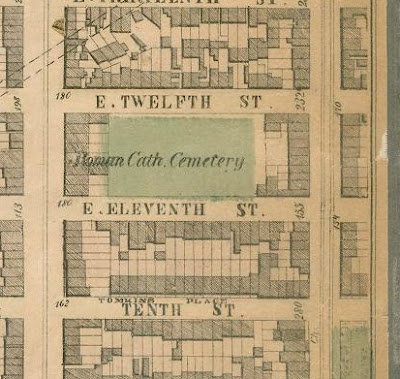 By 1867 the First Avenue frontage of the cemetery had been sold off and tenements built. So where this stone wall now stands was, from 1867 on, the boundary between the cemetery and the residential structures to the west.

You can read the whole post here. It's an interesting read, and possibly more proof that the city should conduct a search for remains before Steiner's project moves forward.

Early last year, preservationists submitted a request to the Landmarks Preservation Commission asking them to landmark the church. The LPC denied the request. (Read about that here.)

Metro has an article on all this today as well. Find that piece here.

Preservationists call for archeological review of former cemetery at Mary Help of Christians site
Posted by Grieve at 5:59 AM

Someone needs to get Zelda Rubinstein on the phone.

It is a beautiful church, but not all churches can be preserved. Hopefully that will figure out to preserve at least the bell tower.

The fact that a Catholic cemetry once was on this land does not justify holding up development by the new owner. I note no one cared or raised this objection when they built Open Road Park in the 1990s. Now that someone wants to develop the land on the lot of the former church and despite the fact that nothing archaeologically significant has been found to justify suspending development, people want to go on an exploratory archalogical dig. Fact is this is just an attempt to prevent the new owner from developing the property under the theory that somehow developing the property is a bad thing.

@Anon. 3:26, please skulk back to the real estate office you work in and leave this neighborhood to those of us who love it rather than hand it freely to those who see it as a place to be raped for their financial benefit. Not EVERYTHING needs to be developed.

As to the wall, I may be mistaken, but isn't this the wall that forms the interior of Neptune's garden? That's an ancient stone bulwark, and looks just like the one in the picture. Always wondered where such a thing had come from - it is obviously not of this century - but the mystery may now have been cleared up for me.

A little bit about Mary Help of Christians. Even if we didn't know the history of E. 12th St. and its Italian heritage (preserved of course today by Bella Tile and deRobertis and Venero bakeries); we would still know that it was built for an Italian population. It is a model of Il Gésu in Rome. This was designed by Vignola and consecrated in 1584. Reproductions of this church can be found in every square in Latin America as the Jesuits spread Christianity in the new world and in many town squares in Italy. Il Gèsu is the mother of all Baroque churches. In our case, the style was selected so that recent immigrants would recognize the building as a church. On the upper east side, St. Igatius is a really fancy version of the same model. The theme of immigration and seeking support from Italian community preservationists such as Italian American Association and the John D. Callandra Institute at CUNY might be a path to pursue.