When 20-ton cranes topple over along the East River 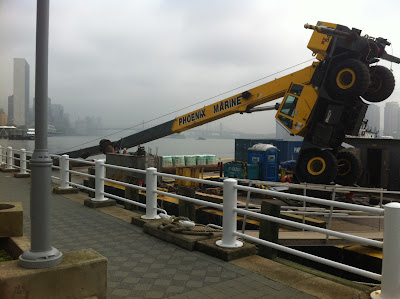 EVG reader Luke Dohner Av. C happened by this scene this morning along the East River at East 31st Street... the crane tipped over while repairing a bulkead near the Water Club restaurant... 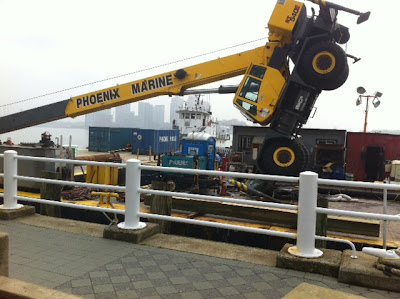 The Daily News has a report on the 20-ton crane accident:

Workers said the crane, which was on a work barge, got stuck on a support beam when it suddenly crashed forward, sending its back wheels in the air. The scene slowed traffic along the FDR, while some passersby, including one pedaling a rented CitiBike, stopped to gawk and snap photos.

There were no reported injuries. And had this been the Post, the editors would have blamed the accident on the Citi Bike.
Posted by Grieve at 4:35 PM

Actually thats one of the new lightweight CitiBikes they're testing out since the current ones are so hard to pedal. Looks like its back to the drawing board!

Its a grounded Phœnix!-A Maritime one indeed

damn! everythings been quiet since pouring the concrete into the dorm on 3rd av

The CitiCrane share is a convenient way to get to and from work, run errands, and take in the city! I just bought a yearly pass!