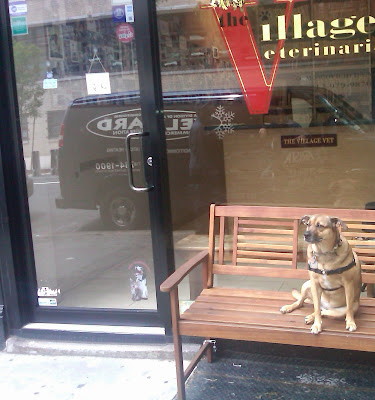 Almost summer. And time to check in with the owners of Kita the Wonder Dog of East 10th Street. What's new?

This week Kita the Wonder Dog of East 10th Street realized she was overdue for her first post-adoption annual checkup. She was quite brave during the series of shots, though less so when the nice vet needed to draw blood. She winced rather dramatically and was most unhappy.

But she managed to get through it and received a spotless bill of health. Only hiccup was that she has apparently developed a bit of a weight problem. Indeed the vet’s assistant pronounced her a “Double-D girl” to which she (and we) took great umbrage. We suggested “Rubenesque” might be a better characterization but in any case she is now on a strict summer diet, which essentially means no more endless doggie snacks on demand.

She’s not particularly pleased about that even though we explained it’s swimsuit season. She was more pleased with her new jewelry showing she’s all up to date on her immunizations. She’s looking forward to showing off her new bling around the neighborhood this summer. 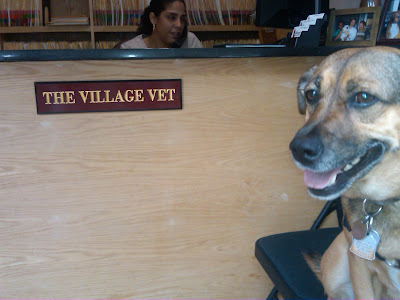 On the next episode: Kita learns that Howl! means something entirely different in Tompkins Square Park this weekend.

Happy holidays from Kita the Wonder Dog of East 10th Street
Posted by Grieve at 6:30 AM

She doesn't look chubby to me. Just as cute as ever.

Glad Kita is healthy. Make sure you get her teeth cleaned by the vet every year or two. You will be glad not to have to deal with teeth issues when she is older and it isn't so easy to take care of them.

try giving Kita celery or chunks of apples as a treat. my dogs love them and I've been able to cut back on their regular kibble.

She certainly does seem to love her east village eateries! A gorgeous girl, and very happy looking!