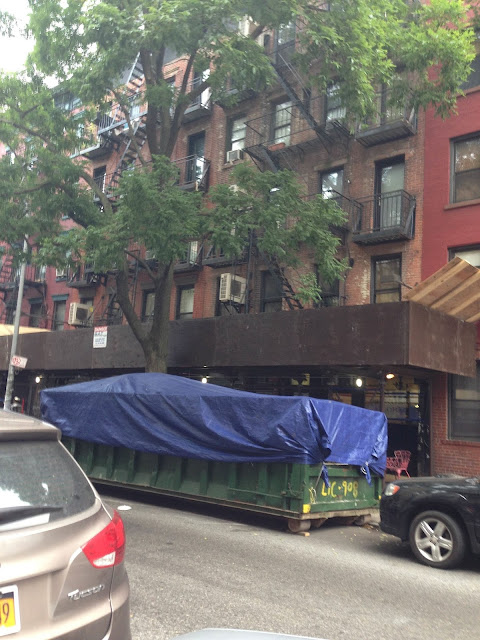 In recent weeks, scaffolding and a sidewalk bridge arrived outside 514-516 E. Sixth St. between Avenue A and Avenue B... back in the summer of 2010, the Board of Standards and Appeals (BSA) voted to approve a sixth story that had been added to the building the previous year, but not the penthouse above it. That addition needed to come down.

Then workers and the sidewalk bridge arrived. And residents were immediately suspicious.

On June 11, when the work began, one resident told us: "Management told me they are 'doing construction on the roof,' but wouldn't offer any more details and seem very annoyed at my question."

And later that day — "I see them bringing some large pieces of wood slabs upstairs. I don't think they are deconstructing at all."

However, according to The Villager this week:

Kelly Magee, the Department of Buildings’ press secretary, said what’s going on is that Shaoul is indeed removing the tenement’s illegal seventh-story penthouse. He also had added a sixth story but is being allowed to keep that. The work is being done in compliance with a Sept. 12, 2012, ruling by the Board of Standards and Appeals.

A photo of the work yesterday via a reader... 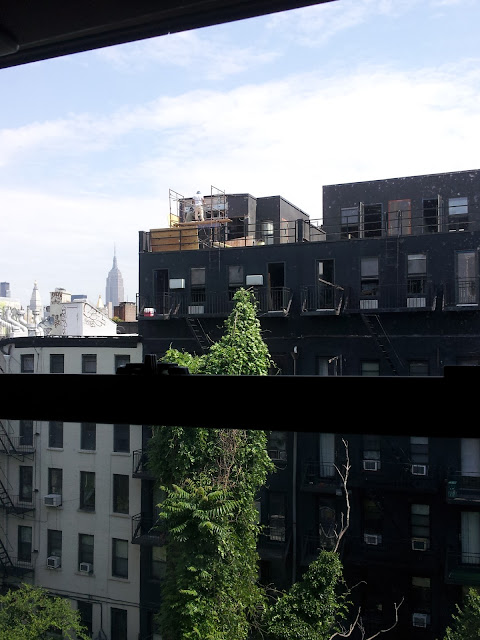 Meanwhile, tack in 2008, the BSA decreed that the one-story addition to the Ben Shaoul-owned 515 E. Fifth St. was illegal and should be removed. There was a BSA hearing on the matter on May 21, with another scheduled for July 23.

Previously on EV Grieve:
[Updated] 5 years later, another BSA hearing on illegal rooftop addition at 515 E. Fifth St.
Posted by Grieve at 5:55 AM

Why aren't they removing the penthouse on 516 E 6th St. That was also subject to the same BSA determination and it is far larger, as your photo illustrates.