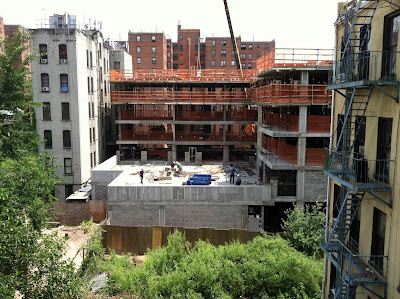 A milestone, of sorts, to note on the incoming Alphabet Plaza, the 12-story mixed-used apartment building at East Houston and East Second Street/Avenue D ... As far as we can tell from the picture by EVG reader Ray, it appears the building is now at the 6th floor mark and climbing... on its way to...

[Via The Real Deal]

Will this thing be as enormous as it looks?

Alphabet Plaza starts to apply sun block
Posted by Grieve at 5:50 AM