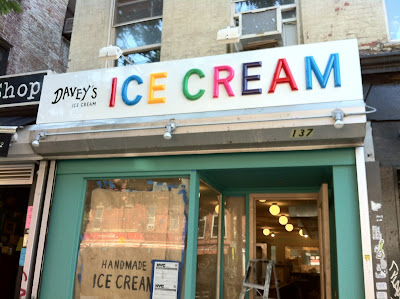 Last Wednesday, we noted that the sign arrived for Davey's Ice Cream at 137 First Ave. between St. Mark's Place and East Ninth Street ...

We reached out to the proprietor, David Yoo, to learn more about the shop...

About his ice cream:

I will be making small batches of traditional and seasonal ice cream flavors from scratch in the shop, meaning I will be mixing and pasteurizing my own custom ice cream mix. It's making ice cream the hard way!

I lived in the East Village while in school (Parsons, I'm a former graphic designer), and I knew this was the location for my venture. Rent is getting out of control in EV/LES, but I'm excited to give it a shot here.

About his change in careers, from graphic designer to ice cream store owner:

The idea to switch career gears was definitely a lightning bolt moment. I could have continued moving from studio to studio and do more of the same, or really try something different while still being creative.

Opening an ice cream shop has always been an inside joke of mine. When I realized there wasn't much of an ice cream scene in NYC like there is in Portland or San Francisco, I knew I had to try this. I finally left my studio, started making ice cream a little more seriously, wrote a business plan, completed the Penn State Ice Cream Short Course in January, and signed a lease shortly after.

I'll be the sole owner of Davey's Ice Cream. I'm also the business guy, ice cream dude, designer, PR, scooper, and janitor. It's all been a very interesting experience so far…

He hopes to open the shop by late July or early August.
Posted by Grieve at 5:59 AM

David, congrats on making the move to do this. If it is successful it will be one of the most rewarding things you do in your life.

Get a big line, get locally famous, and then have other establishments sell your products under your name. You'll get "money for nothing" then. (But the "nothing" is paid for now, as you know).

Good luck. It's a great location, especially judging by the line for lulu's in the nearby organic shop.

There are far fewer graphic design jobs available these days, and many of them pay less than pre-2008. Anything is probably better than staying in that field! The only thing is, you'll have to get out of your chair!

It really is a cute sign! Will definitely give it a try. There are some other indie ice cream places around the neighborhood (not fro-yo, real ice cream) but hopefully there is enough business to go around?

I'm pretty loyal to the Big Gay Ice Cream Shop but I will try to support this guy, too, if his ice cream is good!

Congrats Dave for taking the leap and believing in yourself. I did a similar thing 13 years ago and opened my own business and it is the best thing I ever did. It is great to see a "new" business that is not a franchise opening in our neighborhood. See you soon.


Am I the only one who read this, a little too quickly, as "pooper scooper"?

Remember all the negative naysayers when this first story popped up and everyone b*tched about artisanal this, expensive that? How come everyone is all of a sudden on board? Small businesses ARE NOT bad for the EV. It may be pricier, but the landlord's not charging any less for rent.

Thanks to everyone for the support and EVG for the story. I will do my best for you guys!

Sounds great! The Penn State course that he refers to is the best way in the USA to learn about ice cream. It sounds like the proprietor knows his stuff- combined with the awesome attitude, I can't wait to try his stuff!