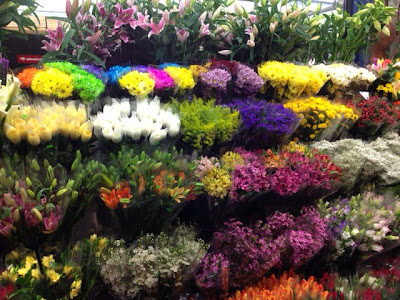 [The flowers outside East Village Farm and Grocery this spring. Photo via Creature]

Help raise money to help pay the medical and other costs of flower shop operator Akkas Ali, who was mowed down by a speeding driver on 6/19.

On June 19, 2013, a speeding, intoxicated driver racing down Second Avenue slammed into the flower stand outside East Village Farms & Grocery on 2nd Avenue and 4th Street. The driver struck and greviously injured Akkas Ali, the 62-year-old flower shop operator who had been working at that location for 22 years. Mr. Ali has a wife and three sons, and they all need our support in this time of terrible tragedy.

Whatever money we can raise will help defray Mr. Ali's medical cost and lost income while he attempts to recover from his injuries. Raising money for Mr. Ali will also help give him piece of mind that his family is being taken care of. Please, let our caring East Village community, the City of New York and all others with generous hearts show our love and support for Mr. Ali and his family by rallying around them during this incredibly diffcult time.

Said Marlow in an email announcing the launch: "I went through this same thing with my father when he was just 4 years younger than Mr. Ali, and one of Mr. Ali's sons is the same age as I was when my father was stuck and seriously and permanently injured by a speeding, intoxicated driver. So I know how much this kind of support would help him and his family."

You may find the GiveForward site here.

As for Ali ... Matt at neighborhoodr! spoke with the East Village Farm and Grocery folks yesterday.

Ali’s son stopped in earlier with an update on his father:

He had two broken bones in his leg, femur and shin. He also had internal bleeding inside his skull. He underwent surgery yesterday. He’s still on a respirator and isn’t communicating.

Read the rest of his post here. WABC has a report here.

I'm going to check back next week to see if I can donate some more... Have we heard anything new on that worthless scum driver?

Yes! The thought passed my mind to set up a similar fund (even though I never met Mr. Ali but live in the neighborhood and have shopped there).

I'm glad someone already took up the charge! I will donate now!

Thank you, Grieve, for passing on this word to us.

Donation made. Thanks for posting. Poor guy.

Thanks for posting this and giving us a forum to donate. Going there now. Get well soon, sir.

I really hope the driver of the car has insurance so the victim's family doesn't have to worry about medical finances and loss of work. The donations are very generous too because insurance might not cover every foreseeable need. But really it should.

unless the driver was uninsured he will not pay for any of the medical cost...imo all this donated money should go to finding the best lawyer for this guy, he is inline for a million plus dollar lawsuit.

Just made a donation, and will be sure to stop by the deli to buy flowers and cold drinks this weekend. Get well soon Ali, sending prayers to everyone else who was injured.

It's very moving how such a tragic encounter gathered the community together and brought out the positivity and kindness from everyone.

The initial medical costs are covered by the New York Sate Crime Victims Compensation Board being that this was a criminal act. I can not say with certainty if this includes long term physical therapy or long term after care.

Everyone, please share this link on your own social media sites. There are sympathetic people beyond the immediate neighborhood. And even if insurance does end up covering some of Mr. Ali's costs, it can be quite some time before his family actually sees any compensatory money from it. They need money to live in the meantime.

Anonymous @ 1:22 - I couldn't have said it better myself and you are exactly right. Please everyone, use social media and email to help spread the word. We are off to a great start but have much more to do. The more people who hear about our effort, the more successful we will be. Thanks everyone!!!

Just when you think you're the coolest cat in town, sitting in a nice car, attracting beautiful chicks...that's usually when reality bites you big time. This accident destroyed 2 lives.

Lawyers work these cases on a contingency fee basis, so whoever takes this case will get somewhere between 30-40% or so of whatever is awarded or gotten as settlement from the dirtbag's insurance.

In the meantime, helping his family to get by now without his income will probably be much appreciated right now.

Props to Chad for this community effort and Grieve for posting.

Grieve, Please keep us updated on his conditions and needs. Also, news reports stated the car was ra rental. I doubt he will be in much need financially if a good samaritan lawyer gets involved. In my ignorant opinion, a pro bono lawyer would be more helpful than a cash fund... Still, how lovely of everyone to be so thoughtful

Accident update: Flower seller Ali is in bad shape with a head injury, and the 2 other bodega workers have broken bones. The driver of the car had PCP in his sock and repeatedly asked cops "Am I dead?" and he wasn't asking a rhetorical question.

Note that drunk driver Shaun Martin evidently didn't ask cops if anyone else who he had just mowed down with his car was dead. He apparently didn't ask "Did I kill anyone?" or, "Is anyone injured?" No, he only seemed to care about himself. My only advice to Shaun is this: keep trying, just don't jump in a car and race down 2nd Avenue. Because you might kill someone else next time.

EAST VILLAGE — The drunk and drugged-up driver who slammed into several pedestrians and a Citi biker this week had PCP in his sock and was so out of it repeatedly asked cops "Am I dead," prosecutors said.

Shaun Martin, a 32-year-old Bayside, Queens resident, was charged with driving high, operating a vehicle while intoxicated, criminal possession of a controlled substance and vehicular assault, according to the complaint.

Martin was convicted in May 2007 of "operating a motor vehicle while impaired by drugs," the Manhattan District Attorney's office said.

Witnesses and cops said that Martin cut across three lanes and jumped a curb on Second Avenue near East Fifth Street just before 7 a.m. Wednesday — mowing down a street sign, a fire hydrant and a tree — and sent a 300-pound Muni-Meter flying.

Martin then hit three bodega employees — who were 54, 62, and 39-years-old — before rear-ending a 37-year-old man on a Citi Bike, witnesses and cops said.

The most severely injured worker lost consciousness and suffered an internal head injury and broken femur and ankle as well as a foot wound, the DA said.

The second and third workers had a compound elbow fracture and broken ankle, respectively.

A police officer at the scene of the accident said that Martin "had bloodshot eyes, was unsteady on his feet, kept repeating 'Am I dead?'' the criminal complaint states.

An EMT later treating Martin found PCP in a Ziploc bag squirreled away in his sock, prosecutors said in court papers.

A woman who had been with Martin just before the accident told law enforcement agents that he "had been drinking and doing drugs all night," the complaint added.

Thanks for the update, Giovanni — I'll do a separate post with the DNAinfo piece.

If Ali's (and other) insurance doesn't cover all his costs, the hospital can put a lean on any insurance or other legal recovery he gets, but they cannot put a lean on donations, so this donated money is free and clear to Ali and his family. Something to consider.

I went to the site named for donating via my credit card, but they required too much info. I don't see my e mail and phone number as being necessary to make a contribution. Also the 7% service charge is steep - that's a big chunk for any large contribution. Anybody know of a different way? Bobby