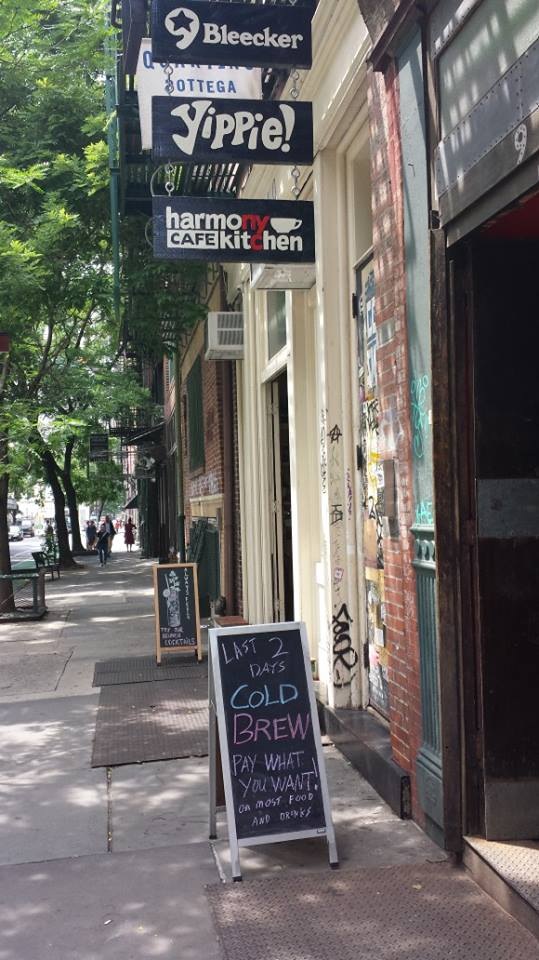 EVG reader Stephen Popkin spotted this sign outside the Yippie Museum Cafe yesterday... both employees on duty at the Harmony Kitchen and Cafe, the space's vendor, confirmed the closure for this weekend.

At this point it's unclear what will happen with 9 Bleecker Street, the longtime headquarters of the counterculture group and home to the cafe just a few storefronts west of the Bowery.

On June 10, Colin Moynihan at The New York Times, reported that Yippie leaders have been fighting an attempt by a lender to foreclose on their three-story home. Things took a turn for the worse last month "when a judge appointed a receiver to manage the building and collect rent."

In court documents, Steven L. Einig, a lawyer for a company called Centech, which holds the building’s mortgage, stated that Yippie Holdings, which bought Number 9 along with a nonprofit called the National AIDS Brigade, had failed for more than five years to make payments on the $1.4 million mortgage.

A lawyer for Yippie Holdings, John Diffley, said in an e-mail that his clients “were compelled into foreclosure with payments being rejected” by Centech as part of a scheme or plan to take over the building.

Said Popkin: "Sad, but it seems over."

Updated 8:51 a.m.
We checked in with Rachel Kay, a member of the board of directors at the Yippie Museum ... she confirmed the cafe's closure. As for the rest of No. 9?

"At this point: we have no idea. I hope that possibly the building will remain and then maybe another cafe will take its spot. I just hope that it doesn't become what everything else in the neighborhood has," said Kay, whose father is The Pieman, Aron Kay. "It's one of the last remaining foundations of the East Village."

Previously on EV Grieve:
The Yippie Museum Cafe is in financial trouble
Posted by Grieve at 6:09 AM

The Yippie Cafe was evidence that the Yippies weren't a complete anachronism.

Don't take out a $1.4M mortgage if you can't afford to make the payments. Or sell when you see you won't be able to afford payment.

They haven't paid toward their mortgage in five years!

It seems their 'last ditch effort' payments hadn't been accepted lately by the new management company because it was too little, too late.

They had already proven themselves to be bad mortgage holders with no viable solution so it's no wonder the place will be foreclosed upon.

This was a court-ordered decision by a judge who likely saw all the evidence he needed to see.

The best, cheapest, coffee on the block?

2:23, so do people who tie up the system and our taxpayer dollars because they don't pay against a mortgage for years.

I always meant to go inside, whenever I passed by the Yippie Cafe, but I never did. Now it's too late.

I had the privilege of reading last month at Gordon Gilberts monthly tributes to the Beat Poets and was there last week for a Patti Smith tribute with some old friends. Gonna' miss the joint.

The smell of cat urine in that place was really crazy strong. Not conducive to stopping by for something to drink or eat, for sure.

Will really miss this place and what it stands for. Great place to work and think. Echo of the Village the way it used to be, when the Village was still the Village and not mid-town.

SQUAT AND TAKE OVER THE PLACE

The yippies harm reduction program, and Dana Beal's generosity in opening 9 bleecker to me as a safe space enabled me to get off heroin as a teenager.