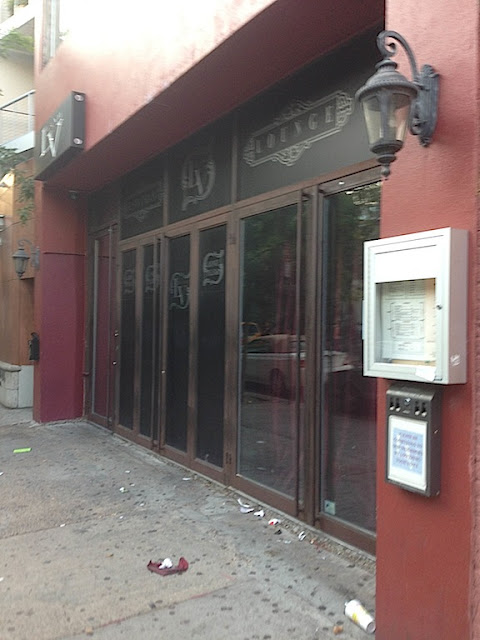 The long battle between East First Street residents and La Vie has finally come to end. The club has officially closed.

As we first reported on June 11, the 1st Department of the Appellate Division of the New York Supreme Court upheld the revocation of La Vie's liquor license. Although that decision was handed down on June 6, the club remained open.

However, last evening, a tipster on the block told us the following:

"They are moving all of the red velvet seating out to a Budget truck out front right now! The block is rejoicing."

Dear friends, Thank you for all your support during the past couple of years. Unfortunately La Vie will close due to certain circumstances. We hope you all enjoyed La Vie while it was around. We will miss you all!!

Neighbors have long complained that La Vie was operating as a club under the guise of a restaurant. According to residents speaking out at past CB3/SLA meetings, the dance music emanating from the club was loud and disruptive to their quality of life ... and they claim there was often chaos in the streets as patrons entered and exited.

Now for Luca to shut its doors forever...

And every other bar nyc! Lets campaign for 1am closings!

Now please tell me how we can get No Malice Palace under control(3rd St at Ave B)! This is a bar that has been operating as a club for 13 years. We live in the building above it since before it was here. Crazy loud music, a DJ and NO sound proofing. We've tried calling 311 but nothing was done. Worried about retaliation from the landlord.

This is an important victory. We should galvanize around it and target some of the other problem venues in the neighborhood. Ideally, we should be able to anticipate similar troublesome clubs/bars and stop them before they become a problem, so we don't have to deal with places like La Vie for another two years.

If you don't want bars clubs , you should move to a nice quiet street in New Jersey. So sick of the knee jerk anti bar fogeys with their NIMBY attitudes. Not defending this bar, but the knee jerk reaction against nightlife is sad and pathetic.

"If you don't want bars clubs , you should move to a nice quiet street in New Jersey."

Well, well, well. We have not seen you in awhile. No further comment needed nor necessary.

This is 936pm. I have lived in the neighborhood for over 20 years. Do not frequent bars-clubs and have not posted on this topic before so don't know what you are referring to. Also, don't pretend to speak for the neighborhood cause you don't.

936pm: The only sad and pathetic thing is your lamentable lack of understanding and sympathy for the people and families who have had to endure this place every night for two years, dealing with hordes of club-goers from everywhere except the immediate neighborhood descending upon First Street and causing havoc. There have been fights, excessive drunken screaming, and a shooting. There is nothing knee-jerk about residents taking action agains a rowdy and dangerous venue in their own backyard. The only knee-jerk reaction is your own. Regardless of how long you've lived in the neighborhood, you clearly have no conception of what a *neighborhood* means. Perhaps it is you who should move to a nice leafy street in bucolic New Jersey. I hear it's quite beautiful this time of year.