Report: Driver in East Village Farm and Grocery crash asked cops if he was dead 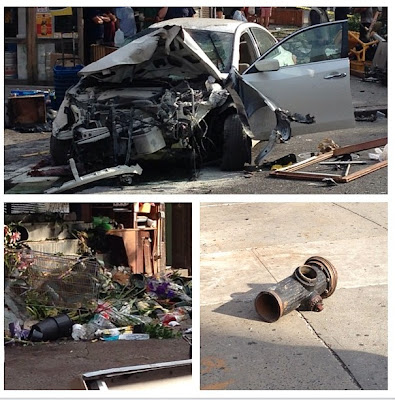 DNAinfo has an update on the horrific crash that injured four people early Wednesday morning on Second Avenue and East Fourth Street:

The drunk and drugged-up driver who slammed into several pedestrians and a Citi biker this week had PCP in his sock and was so out of it repeatedly asked cops "Am I dead," prosecutors said.

Shaun Martin, a 32-year-old Bayside, Queens resident, is being held on $100,000 bail. He is due back in court Monday, per DNAinfo.

Campaign launched to raise money for gravely injured East Village Farm and Grocery worker
Posted by Grieve at 10:11 AM

PCP?!?!?! Drag racing, while drunk and PCP?!?!? And priors???? Lock em up throw away the key. Deserves no leniency whatsoever.

I wish he were.

Some case and charge details here.

It's public info--You can track the case at the NYS courts site.

Thanks, pinhead. If I'm reading that correctly, it looks like the charge he _might_ serve time for is Second Degree Vehicular Assault, right?

Does anyone know what's likely to happen? The DA will make some kind of plea offer, right? Say, guilty to the 2nd Vehicular Assault and wave the other charges? What then, assuming he takes the plea? What's average jail time for that charge?

It's certainly worth following. I'll be pleasantly surprised if he goes to jail.

I couldnt find a video with sound but he is seen/heard saying "somebody shot me" several times on video and he checks himself for bullet holes...