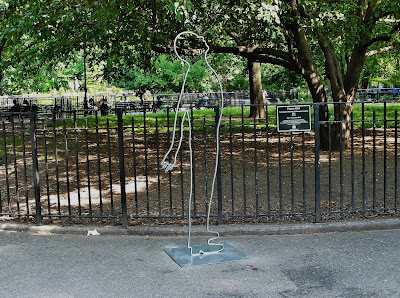 We noted on Monday that the life-sized sculpture of Christopher Gamble's silhouette arrived in Tompkins Square Park this past weekend. French artist Fanny Allié created this in honor of Gamble, who was homeless for nearly 28 years... he spent a lot of time in the Park.

However, later in the day on Monday, we noticed that the sculpture was gone... 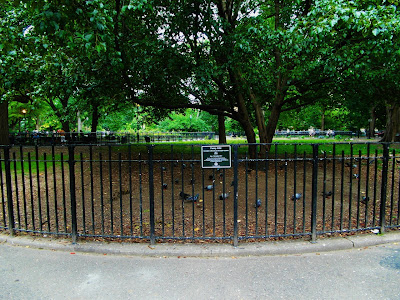 We contacted Allié, who the Parks Department commissioned to create the art, to see what was happening...

"I removed the sculpture temporarily ... in a few days it will be at the exact same location but behind the fence and under the tree (that's why I left the plaque there)," she wrote in an email. The sculpture is slated to remain in the Park through the summer for about five months ...

She expects the sculpture, named Serendipity, to (hopefully) be re-installed on Friday evening.

Allié also shared photos from Sunday... where she unveiled the sculpture ... Gamble, who now lives in an apartment run by the Bowery Residents' Committee, was on hand and posed with the silhouette... 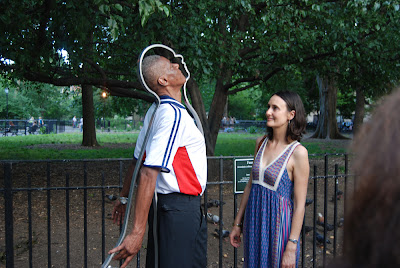 Serena Solomon at DNAinfo interviewed Gamble and Allié about the sculpture last month.

"I thought it would be good. Why not?" said the 67-year-old Gamble, on why he agreed to pose for the sculpture. "It's exciting for a person that doesn't really mean anything to anyone."

Read more about the background here.
Posted by Grieve at 6:00 AM