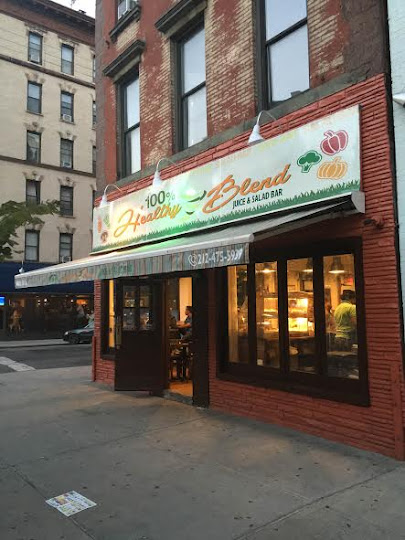 The quick-serve restaurant features create-your-own salads ... as well as juices, smoothies, empanadas, arepas and more...As we understand it, the owners of Dahlia's are also behind this no-booze venture.

The SLA temporarily suspended Dahlia's liquor license after serving a reported 50 minors one night in January. The Mexican restaurant then closed in May.

There have been several food openings of late ... including (to recap) Ess-A-Bagel ... Guac NYC and Agios Greek Rotisserie ... In addition, Raclette is now open in its larger space on East 12th Street, the former home of Northern Spy.

I'm confused. Is it 100% or a blend? Or 100% Healthy and the name of the shop is Blend? Will they serve minors? We need clarification on these matters.

It's almost as bad as that TakeMeHome sign with the crotch-flashing chicken. I won't even ask why'd you want to blend a small pumpkin. Is that a new 'bowl'? Gojira?

Come on guys, ease up on old Dahlia. Maybe she is trying to finally get her shit together.

Eh, NOTORIOUS, I got nothin'. Was trying to come up with a pun about a crusty-themed health treat called Punk-in Bowl, or something to do with Al Gourd, but just couldn't quite get there. Sorry to disappoint = anyone else?